On the Chinese market the world giant is represented by subdivision Anheuser-Busch InBev China Co., Ltd. which controls the activity of 16 subsidiaries and joint ventures. They are responsible for beer production and distribution throughout the country managing nearly 50 breweries with the net capacity of 91 mln hl*. Two national and one international brand by AB InBev are well known in China today: Budweiser, Harbin, and Sedrin together account for nearly 73% of the companies’ sales.

* The exact number depends on the official estimation of the companies which can change in the nearest updating resulting from launching of new and relocating of the existing capacities.

Despite the market fluctuations, AB InBev sales were growing steadily within the period 2009-2015. And while until 2012 inclusively the company’s sales growth coincided with the industry growth rates, in 2013 AB InBev grew to 14.2% and the industry’s average was 4.6%. Since that moment, AB InBev has been exceeding the competitors considerably. 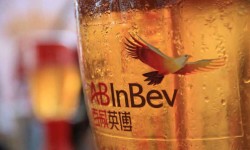 In 2015, the company sold 74.562 mln hl of beer and beverages in China, which is 4.4% more versus the previous year. Such a good rate was mostly connected to acquisitions as according to reports the organic growth amounted to as little as 0.4%. However in the first half of 2016, there was a 1.8% decline observed.

Since 2010, the market weight of the company has grown from 11.2% to 15.8%. AB InBev ranks third on the Chinese market being inferior only to CR Snow and Tsingtao. 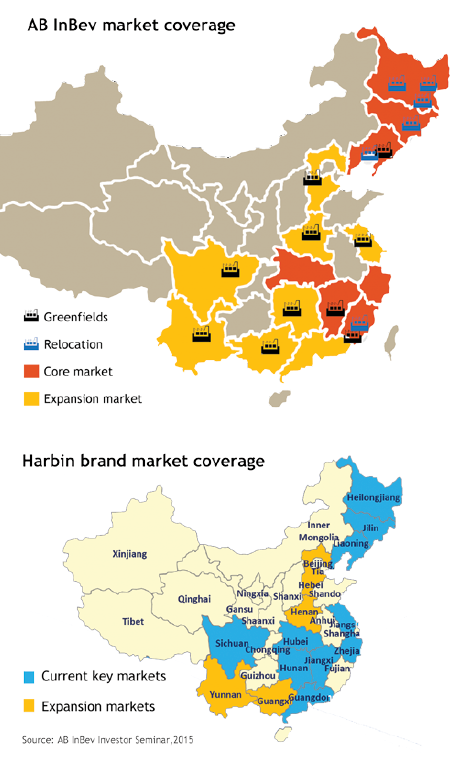 AB InBev expansion on the Chinese market has been in progress for more than 30 years, if we consider AB InBev to be a successor of companies Interbrew and Anheuser-Busch.

Interbrew’s strategy in China has been to focus on the coastal areas, and since 1984 the Belgian group has steadily increased its presence in the country – first through the transfer of technical and brewing know-how to various Chinese brewing companies, such as Zhuajiang Brewery in Guangzhou and Five Star, and then via the acquisition of the Nanjing and Jingling Breweries in 1997 and stakes in the Zhuajiang and K.K. Group.

Partnership with Guangzhou Zhuajiang
One of the major beer manufacturers in China – Guangzhou Zhuajiang Brewery was started as a state-owned enterprise as far back as 1985. The brewery and main beer brand is named after the Pearl River, (Zhu Jiang), as Guangzhou is located in the Pearl River Delta. In 2002 Interbrew bought 25% of the company’s stock and on this base a joint venture was formed. In the partners’ agreement the settings for competition and cooperation are stipulated. The current capacity of the brewery is 21 mln hl.

According to Zhuajiang Brewery report a big impact was made by the expansion to regional market outside the southern China with their title brand. Besides, the company carried out a restyling of package and focused on the segments that have been stable and profitable: can and middle-priced “draft” beer in bottle and even “craft” beer.

The 90-s for Anheuser-Busch were mainly dominated by participation in Tsingtao Brewery privatization. Province Shandong is one of the major beer markets and its location allows to effectively develop other attractive regions of the eastern cost. However, in 2009, when the brewing giant already possessed 27% of Tsingtao Brewery Co., Ltd. Stock, it had to sell it. The money was needed to pay the creditors for mega-acquisition of Interbrew in 2008. 19.99% of stock went to Japanese Asahi Group the remaining 7% became the property of a private party. The net sum of the both deals amounted to $902 mln.

After selling a share of Tsingtao, due to the acquisitions performed by Anheuser-Busch and Interbrew, AB InBev now feels confident at the Chinese market, but the geography of production and sales leaves much to be desired. Harbin Brewery Co., Ltd. as well as its regional brand Harbin in province Heilongjiang in the northeast of China has become the most valuable asset of the company in the new conditions.

This part of the company history is worth a closer look.

Harbin Brewery is the oldest beer producer in the north of China, which marked its 115-th birthday in 2015. Over its history, the company lived through changes of borders, political systems and many owners.

One more turning point was passed in June 2003, as SABMiller bought out 29.6% of Harbin Brewery stock and in a year made a proposal of purchasing the remaining shares. Yet, because of its global competitor, SABMiller never obtained a control over the fourth major beer producer in China.

In May 2004, Anheuser-Busch joined the struggle, also having acquired 29% of Harbin Brewery Group stock for $139 mln and made a counter-offer on purchasing the rest of the stock. As a result, Anheuser-Busch at first obtained a controlling stake, and then bought the shares of the Chinese brewery at the price 2.5 times exceeding the sum of the last year deal SABMiller-Harbin, from SABMiller.

In May 2006, the company doubled its business in China by acquiring 100% of the Fujian Sedrin Brewery. This step allowed the company not only to become a sales leader in Fujian province, but also to approach the biggest market of the east coast. For the company itself, Fujian province is also a very important region with the biggest share in the total sales volume, nearly 18%*.

The traditional strategy of AB InBev expansion to big markets lies in choosing a strong regional brand with a certain geographic link and gradual expending of its distribution at the national level. Economy brand Harbin became one of those, as it was a strong regional brand with a huge share in provinces Heilongjiang and Liaoning but hardly represented in the south.
After acquisition of 2004, Harbin turned out to be the biggest part of AB InBev portfolio, its share on the national market at that time amounting to about 3%. Future megabrands by competitors, namely, Snow, Tsingtao, and Yanjing had a little bigger market weight. However the market leader by that time possessed a developed production network in the key regions, so they progressed very rapidly. Besides, till 2009, Tsingtao was rather a partner, not a competitor. That is why the strategic plans till 2009 could have been based on partnership, and brand Harbin played a secondary role at that time. 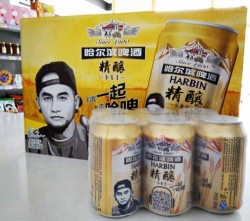 Beer Harbin started exceeding the market since approx. 2010. The brand was advancing along with many other new breweries’ entering the structure of AB InBev and bottling Harbin and Budweiser. Brand Harbin’s market share in 2009 was less than 3%, but in 2015 it reached as much as 5.5%, according to our estimates, based in the company’s sales structure. The market share by value is probably approaching 7%. But according to Gfk survey, carried out in May 2008, 8% respondents considered Harbin their favorite brand.

Naturally, the market premiumization led to Harbin sorts range expansion and Harbin family drift from the mass economy segment. Harbin Ice which belongs to the mainstream beer and even more expensive Harbin Ice Genuine Draft are becoming the key brands. According to the company’s report, the share of Harbin Ice increased from 15% to 38% of the Harbin family during 2009-2014.

Currently AB InBev is putting much effort into Harbin promotion placing the stake on Millennials. Sustaining an image of a “cool” brand that “brings fun”, the company employs a popular among the youth sport and street images in commercials and package (Street Dance, NBA, and etcetera).

Though Harbin is a major brand in AB InBev product range, in terms of profits, margin, and status, Budweiser is more important for the company.

The first bottle of Budweiser was distributed in China in 1995 but initial launch didn’t go as well as expected. There were a number of issues, including undifferentiated packaging, marketing that wasn’t relevant to the customer and the employment of a US-style distribution model that did not apply in China.

Budweiser as well as Harbin got second wind approx. after 2009, when AB InBev production geography started expanding and the premium segment saw a fast growth. Under our estimation, based on the company’s sales structure, Budweiser sales volumes have increased since 2009 by more than two times to 17 mln hl and the market share has increased from 1.3 to 3.6%. According to Gfk survey made in May 2015, 11% of respondents named Budweiser as their favorite brand. 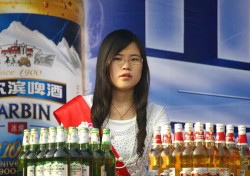 AB InBev is conducting researches of their own too, measuring premium beer consumer’s preference in 15 cities. According to the company’s data, in 2011, the popularity levels of Budweiser and Tsingtao were practically equal. But by 2015, Budweiser has gained much market weight, also at the expanse of the competitor as it was twice ahead of Tsingtao by the preference level.

Brand Budweiser’s sales structure is notably inclined to HoReCa. Along with the common Chinese restaurants, dancing clubs and bars form an important outlet. And the retail sales are going into the background. That is the significant difference of Budweiser and Harbin.

Accordingly, advertisement campaigns of Budweiser create an image of a festive brand fit for Chinese New Year as well as of a brand connected to the night clubs, wealthy urban lifestyle and an actual for China musical culture Karaoke in 2006, Electronic Dance Music in 2013, popular DJs in 2014, and mass musical festivals in 2015. Besides, AB InBev has absolutely avoided the past mistakes and Budweiser advertisement has been localised in tune with Chinese interests and trends.

Also, the brand’s sales are growing due to superpremium novelty Budweiser Supreme, which competes with the import beer. This subbrand was launched in 2013. According to the company’s data, Budweiser Supreme is now available in over 100 cities with distribution in approximately 15,000 POCs. Volume is up over 80% versus 2014.

In 2006, the company’s portfolio was topped up with strong regional brand Sedrin. According to educated estimates based on the company’s data and regional statistics, Sedrin sales were for a long time at the level of 11 mln hl. Yet, in 2015, they decreased approximately at the same rate with the economy segment according to our estimates. 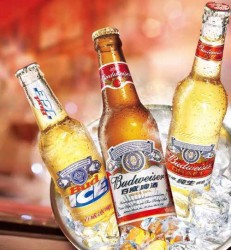 Along with Sedrin, AB InBev portfolio received a lot of other regional brands due to acquisitions such as Big Boss well presented in Jiangsu province, and Ginsber – in Jilin province. However, focusing on the leading three brands and superpremium beer resulted in gradual ousting of the regional brands. They could not stand competition with both national brands by other companies and AB InBev’s own brands. By our estimation, the share of small regional brands in the company’s portfolio went down from 40% in 2009 to 20% in 2015. Besides, natural volumes fell by nearly a quarter.

AB InBev leads the market of the superpremium beer. In 2012 local production of Stella Artois was launched in China. Besides, the company’s portfolio includes import brands, namely Belgian Hoegaarden and Mexican Corona. In order to promote them AB InBev is focusing on western-style restaurant, bar and hotel channels in major cities, though not a lesser sales volume accrues to E-Commerce, where the company managed to leave the competitors behind.

Deceleration and decline of the beer market incited company’s entering the neighboring markets. Thus, AB InBev portfolio was freshened up with MixxTail cocktail (offers 6 flavors) and Johnny Appleseed Cider for young consumers and especially for women, who normally prefer sweet tastes. However, the share of these brands in the sales structure is so far insignificant.