The recent years have been challenging for Chinese brewers because of transiting from stagnation to industry decline. Let us look at the situation historically, in order to understand, when the Chinese beer market first experienced changes.

Over 2007-2016, the brewing industry reflected the situation in the country. One can clearly see the correlation between the beer production dynamics and the GDP. 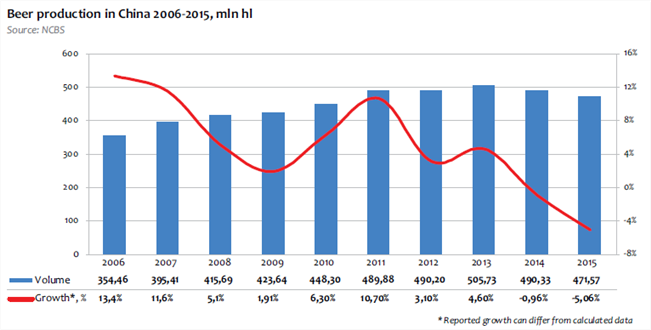 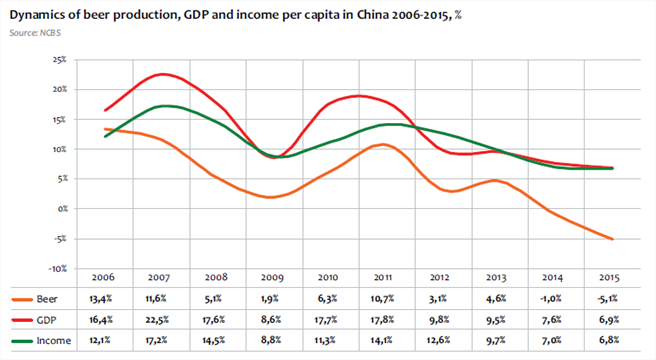 Thus, through to 2007, the beer production in China was growing at two-digit rates. Amid the recession of 2008, its dynamics slowed down sharply, but then recovered at the same speed. The brewing industry was developing in tune with the cycle of the Chinese economy.

However, after the peak year 2011, the dynamics of beer production went unexpectedly down. Companies’ reports and business press gave objective reasons, namely the weather in the third quarter of 2012 was unusually cold and wet. But could it actually play such an important role?

It is obvious now, that the decline in brewing was transient and resulted from the accumulated structural economic and social problems of China and from moving to the “new normal” reality which is currently widely discussed in the business press. The slower growth of GDP affected the beer market too.

Population’s income fluctuation is considered to be the main reason for consumer preference change. Beer is not an essential commodity; it does not satisfy a basic need. Basing on this, it would be logical to suppose that the lower production level of beer was in mainly caused by income decline among Chinese citizens.

But if we look at statistics of the living standards of the Chinese after 2011, we’ll note a discrepancy. Unlike the GDP, beer production dynamics is not directly connected to the official income. Population’s incomes did not decline so sharply, on the contrary, people’s wellbeing was still growing, though slowly.

If we consider this connection basing on a shorter period of time, for example, quarterly over 2014-2015, we will not find any dependence either. Obviously, the change in the standard of living (according to the official statistics) was not the key impact factor in this case.

A certain improvement of the dynamics in 2013 goes beyond the context of the link between the beer market and GDP. And in 2014 there was a significant drop in brewers’ performance, while the official dynamics of the GDP downturn growth rates became smoother. That is when the industry faced a decline for the first time. Starting from 2014, monthly operational data on beer production were mostly negative.

Thus, 2014 turned out to be the moment when the problems of Chinese brewers became obvious. But even years 2012-2013 contradicted the general context of the previous four years and became critical in the riot development of the brewing industry.

In order to make the situation clear, one has to define the fundamental reasons for the change in beer consumption and distance them from local fluctuations.