Authorities in Mandalay Region have recorded more than 350 cases of illegal alcohol sales through August of this year, with the annual total headed for a significant drop for the second straight year. 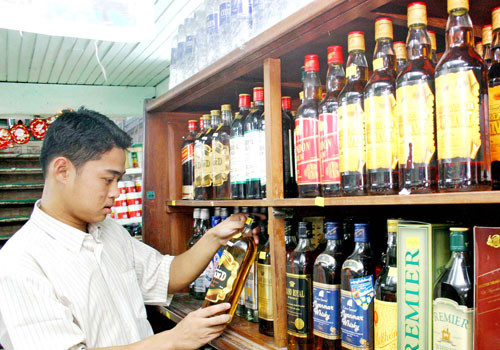 Targeting illegal liquor and beer vendors as well as restaurants not authorised to sell alcohol, a total of 355 cases were opened over the first eight months of 2016, Colonel Myo Win Aung, Mandalay Region’s minister for security and border affairs, told the regional hluttaw on September 20.

The minister was responding to an inquiry from lawmaker U Myint Aung Moe (NLD; Chan Mya Tharsi 2), who was seeking information on the number of licensed alcohol vendors in the region and on authorities’ enforcement of the Intoxicants Law.

“Township administrators have organised cooperation teams with [the administrator as] chairman, a township police major as deputy chairman and municipal members to take action on illegal intoxicant sales in Mandalay Region,” Col Myo Win Aung said. “The restaurants, hotels, motels, inns and lodging houses which are selling intoxicants have been investigated to determine whether they are selling the products in accordance with the law or not.”

With the number of busts so far this year, Mandalay is on pace to drop to just about one-quarter of the figure in 2015, when 1964 cases were filed. In 2014, a total of 2895 cases were recorded. As with the previous two years, the first eight months of 2016 saw males disproportionately represented, accounting for nearly 75 percent of cases.

The dip in Mandalay Region prosecutions for illegal alcohol sales comes despite a promised crackdown earlier this year on drinking establishments that lack FL9 or FL10 licences, allowing them to sell foreign liquor and draught beer, respectively.

The Myanmar Times reported in July that of approximately 7000 bars and restaurants that sell tap beer, only around 2500 hold a FL9 or FL10 licence, while the other 4500 have operated for years without sanction under a FL17 licence, though officially this is prohibited by law.

A total of 5887 shops, bars and restaurants are licensed to sell alcohol across Mandalay Region in accordance with the Intoxicants law, with nearly half the licensees – 2796 establishments – concentrated in heavily urbanised Mandalay district.