The third-largest company in the world’s biggest Buddhist-majority country is ThaiBev, which makes its money selling rum and beer to a population whose religious texts exhort them to abstain from alcohol.

Fully 63 percent of working-age Thais are teetotallers, according to a 2007 study, and yet trailing 12-month revenues at the maker of Chang beer and Mekhong rum have risen 53 percent over the past five years. 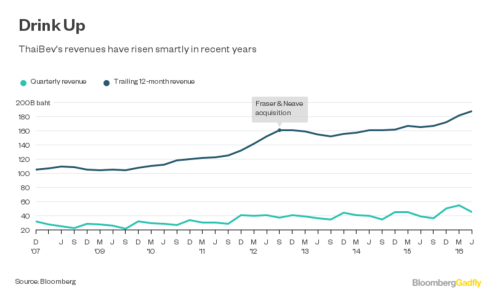 You might expect the death of Thailand’s King Bhumibol Adulyadej last Thursday to have interrupted this revelry. Public drinking will be frowned on during the 12-month period of mourning and ThaiBev’s own website was switched into somber black and white to mark the event. Alcohol sales will be more strictly limited to particular times of the day, according to the Guardian, and hypermarket giant Tesco Lotus suspended all sales of alcoholic drinks, according to AEC News Today.
ThaiBev shares’ peak gain Friday
+3.8%
If that’s bad news for ThaiBev, someone omitted to tell the shareholders. After falling last week as the king’s health worsened, the Singapore-traded stock rebounded with a 1.7 percent gain ahead of the official announcement of his death. In a classic example of sell-the-rumor, buy-the-fact, it rose as much as 3.8 percent on Friday — the sharpest gain since July. By the close of trade it had only modestly underperformed the benchmark SET index over the period since the King was hospitalized. 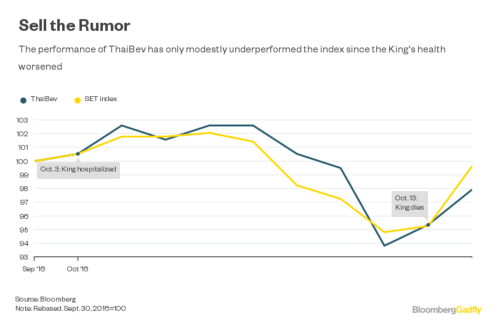 Part of this may represent doubts that the mourning period will turn out to be quite as stringent as everyone expects, though the wailing crowds thronging Thai streets since news of the king’s death broke argue against such a conclusion.
ThaiBev’s very success is a testament to the country’s relaxed interpretation of some of its moral codes. Indeed, one 2002 paper found that Thai men who’d spent periods in their youth living in Buddhist temples were more likely to be heavy drinkers in adulthood than those who had not — the opposite of what would be expected if the sanction on alcohol was unbreakable.
It’s certainly not based on an expectation that ThaiBev’s other businesses will help the company ride out a decline in drinking: Just 4.1 percent of its 2015 revenues came from overseas, and 13 percent from food and non-alcoholic drinks. 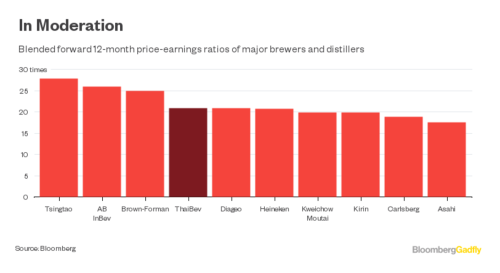 Shareholders at present give ThaiBev a forward price-earnings ratio of 21 — bang on the median for brewers and distillers globally with more than $1 billion in trailing 12-month sales, and ahead of the likes of Diageo, Heineken, Carlsberg and Kweichow Moutai. If more Thais respond to their monarch’s death by abstaining from alcohol than choose to drown their sorrows, that valuation could start looking tipsy.
This column does not necessarily reflect the opinion of Bloomberg LP and its owners.
-By market capitalization.
-It’s often described as a whisky, but is made principally from sugar cane, not malted grains.