Empire Brewing Company’s first shipment of their craft beer has made it to China. After a 4 week journey, Slo Mo IPA and White Aphro Belgian-Style Wit Ale have made it to Panda Brew in Beijing. 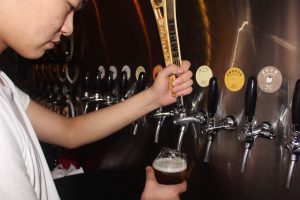 CenterState CEO, an independent economic development strategist and chamber of commerce in Syracuse, New York, made a trip to China in early 2015 with various community partners. David Katleski, owner of Empire Brewing Company and president of the New York State Brewers Association, was one of the delegation members to go on the trip. The group spent seven days meeting with twenty-five organizations; which included government officials and private business owners. The goal of these meetings was to identify partnership opportunities, establishing strong business connections with China.

While in China, David Katleski met Mr. Ji, founder of the Jing Wei Fu Tea Company. The two executives hit it off despite their limited verbal communication and decided to collaborate on a tea beer. 12 kilos of Fu Tea from Shaanxi, China, were shipped to Empire Brewing Company in downtown Syracuse where master Brewer Tim Butler and Assistant Brewer Nat TenEyke incorporated the tea bricks into an original Empire Brew. Dubbed Two Dragons in honor of Katleski and Ji’s mutual Chinese calendar sign, the first test batch had an exceptional reception and Empire Brewing Co. knew they had stumbled upon something big. It wasn’t long before David had set his mind on international distribution.

Jing Zhang, a Chinese citizen living in Syracuse, NY, heard the Two Dragons story on the news and approached Empire Brewing Company with her expertise for Chinese distribution. Zhang was quickly hired as Empire’s official Export Specialist, spending her first day on the job flying back to China with Katleski. The pair traveled across the country with the fresh Two Dragons brew, building brand awareness and valuable business relationships. A member of the Chinese Home Brewers Association helped to introduce Katleski with the owners of the popular Beijing craft brewery, Panda Brew. Since their inauguration, Panda Brew has been interested in introducing quality American style brews to a market that is just beginning to realize their love for contemporary craft beer. Katleski experienced an instant bond with Panda Brew’s Master Brewer Dinghao Pan and co-founder Yu Xia. A partnership was formed, and Panda Brew eagerly agreed to distribute Empire’s beer throughout China, as well as making ‘e’ draft and bottles available at all their pub locations.

Today, Slo Mo IPA was the first of Empire Brewing Co.’s beers to be poured from the taps at Panda Brew. Two Dragons will arrive in China on the next shipment.

“The current craft beer climate in China reminds me of what I witnessed in New York State, and the US, a quarter century ago. I believe that the Empire beer brand has solid potential in China and it introduces NYS craft beer to the Chinese. Two Dragons is a very unique East meets West collaboration of an American Craft Beer and Chinese Black Tea. Our good friends and importer Panda Brew in Beijing China has brought our dream to export Empire beer into reality. The partnership with Panda Brew has been deeply fulfilling on many levels. Our (Empire Brewing Company) Mission is in the Bottle. And our business philosophy is to Grow Local, Craft Global. Both our Mission and our Philosophy are embodied perfectly in this venture.” David Katleski, President and Owner, Empire Brewing Company.

“Empire is such an innovative and vibrant company and that carries over into all of it’s beers. My personal favorite is the Black Magic Stout, it brings such a great full flavor. Two Dragons is another excellent example from Empire that conveys an open minded sense of brewing.” Yu Xia, Co-Founder, Panda Brew

“Empire Brewing Company’s growth into foreign markets is really an exciting moment, and one that is possible for so many in our region. Today’s announcement that Empire’s beer has landed and been tapped in China is the culmination of an opportunity that David Katleski was bold and ambitious enough to pursue following a trip to China with CenterState CEO back in 2014” said Robert Simpson, president of CenterState CEO. “David had the drive and determination to seize a new growth opportunity and to ensure its success. I’m proud that CenterState CEO was able to play a role in making it happen. Congratulations to David Katleski and the entire team at Empire on this new adventure.”