A new family member at NürnbergMesse: The “Beviale Family” is presenting itself for the first time at BrauBeviale, which opens on Tuesday in Nuremberg, and right from the start is showing its international alignment. “With the craft beer fairs in Italy and China, we are complementing our existing platforms for beverage technology, BrauBeviale in Nuremberg and Beviale Moscow, and at the same time opening up key growth markets for customers”, state Dr. Roland Fleck and Peter Ottmann, CEOs of the NürnbergMesse Group, explaining the extended network. As is the case with the mother event BrauBeviale, the new craft beer trade fairs cover the complete beer production process chain – the entire spectrum from aromatic hops to beer taps. 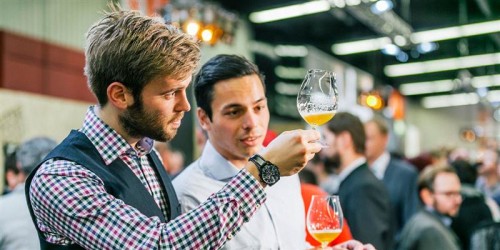 Craft beer is the focal point of the new NM Beviale product family.

“At BrauBeviale, we have for several years been offering exhibitors from the craft beer sector a highly successful forum. The first edition of CRAFT BEER CHINA has shown that the theme is also meeting with great interest in growth markets”, says a satisfied Rolf Keller, Member of the Management Board NürnbergMesse. “We are adjusting the new events to the respective regional conditions. As a result, we are offering international exhibitors the opportunity to open up these regional markets.”

NürnbergMesse China organizes CRAFT BEER CHINA in cooperation with the Chinese media company The Beer Link. Additional expertise is provided by Doemens, a private training and consulting institute for the brewing, beverage and food sector. The next CRAFT BEER CHINA in Shanghai will be held from 17 to 19 May 2017.

In addition to CRAFT BEER CHINA, in future a further craft beer trade fair will complement the Beviale Family – and it will do so in the country of the “Dolce Vita”. From 22 to 23 November 2017, CRAFT BEER ITALY will be held for the first time at the Talent Garden Milano Calabiana in Milan. Together with its partners, Doemens and the Versuchs- und Lehranstalt für Brauerei in Berlin (VLB, Research and Teaching Institute for Brewing), who are contributing their specialist know-how, NürnbergMesse Italia is organizing a conference with a parallel specialist exhibition for the Italian craft beer scene. The event is placing the focus particularly on technologies, raw materials and marketing along with quality development and continuation training.

From raw material up to marketing

The spectrum of the new craft beer events begins with the raw materials, which are particularly diverse for craft beers: in addition to hops, malt and barley, breweries often use exotic ingredients such as herbs or berries. Accessories such as mashing or brewing kettles, filling and bottling plants are specially designed for smaller volumes, which are also suitable for home or amateur breweries. The specialization extends across logistics up to beer marketing, for example with the appropriate packaging and brand-specific beer tap systems.

Presentation of the Beviale Family at BrauBeviale

Interested parties will be able to obtain further information from 8 to 10 November 2016 at BrauBeviale in Nuremberg. The organizers of the Beviale Family events are presenting themselves at the trade fair in Hall 7A, Stand 115.

About the NürnbergMesse Group

NürnbergMesse is one of the 15 largest exhibition companies in the world. Its portfolio covers some 120 national and international exhibitions and congresses and approx. 40 sponsored company pavilions at the Nuremberg location and worldwide. Every year, around 30,000 exhibitors (international share: 41 %) and up to 1.4 million visitors (international share of trade visitors: 24 %) participate in the own, partner and guest events staged by the NürnbergMesse Group, which is present with subsidiaries in China, North America, Brazil, Italy and India. The NürnbergMesse Group also has a network of about 50 representatives operating in over 100 countries.