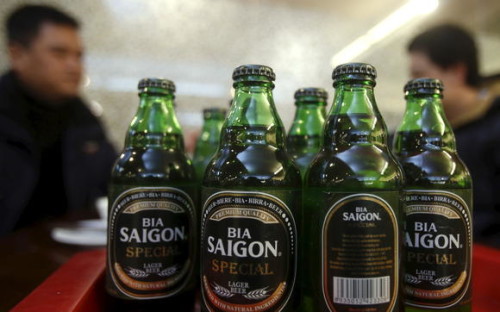 Sabeco has charter capital of 6.4 trillion dong, equivalent to more than 641 million shares. Vietnam’s Ministry of Industry and Trade holds a 89.59% stake in Sabeco, while Heineken has 5%.

Analysts speculated that the small amount of current floating shares will push the price up after the listing. The government’s plans to sell a 53.6% stake in Sabeco this year and the remaining 36% stake next year following the divestment progress would make the shares more attractive to investors.

The main bourse listing process was sped up by the company and relevant authorities after Vietnamese Prime Minister Nguyen Xuan Phuc put the company’s divestment under direct supervision of his cabinet.

Beer consumption in Vietnam reached 3.8 billion liters in 2015, and the industry expects annual growth of 4% to 5% for the next five years.

Local newspapers cited officials from Vietnam’s Ministry of Industry and Trade saying that both Sabeco and Habeco have to list their shares on stock exchanges by the year-end, following the government’s withdrawal plans from the two largest state-owned beer producers, in the market of over 93 million people.

Habeco, owned 82% by the state, launched its debut in 2008. It also plans to list on the HOSE next month. Habeco’s shares closed at 100,000 dong on Thursday, double the price on its listing day on Oct. 28 on Vietnam’s Unlisted Public Company Market.

Both Sabeco and Habeco stocks are expected to be on the list of stocks which have daily major impacts on the VN-Index after being listed on the HOSE.