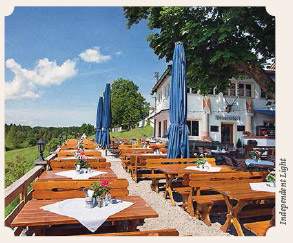 The breweries that remained, or more precisely were restored, at Franciscan and Augustinian monasteries are much less known than replicated commercial images, and the number of such productions in Germany and beyond its limits is very small.

All four Franciscan monasteries with breweries are situated in Bavaria. One of them – Kreuzberg, was founded on a slope of the mountain of the same name which became a known place of annual pilgrimage not only for Catholics, but also for half a million tourists. They climb a 928 meters high stone stairway to enjoy views from “The sacred mountain of Francs”, to see live history and to try abbey beer. 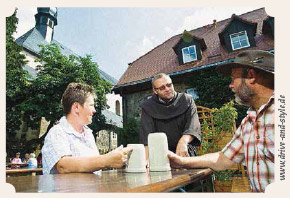 The monastery, founded in 1692, and the Klosterbrauerei Kreuzberg brewery opened in 1731 still belong to the monks of the Franciscan order. The monastery endured the period of secularization rather easily, all possessions remained in property of Franciscans. But for some time beer stopped being brewed in the monastery, production was resumed in 1954 and several times its modernization was carried out. The annual output volume is small – about 85 000 dal of which about one third of beer is sold at a restaurant, the main part of beer is packed in 5-50 liter barrels for private buyers – visitors of the monastery, and a small part goes to other Franciscan monasteries. 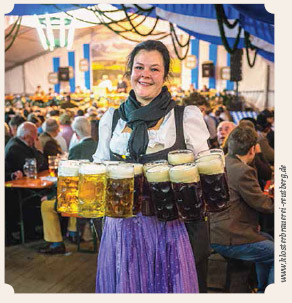 In the settlement of Sachsenkam in the south of Bavaria the monastery of Franziskanerinnenkloster Reutberg is located, which became a popular place thanks to a beer garden overlooking the mountains. Today the tertiaries live in the monastery – people who accept vows to live according to spiritual requirements of the order, but aren’t ready to leave secular life completely.
The first structures of the monastery were built by Capuchins in 1618, but later sisters of the Franciscan order settled there. In 1677 a brewery started working at the monastery and in 100 years a great number of visitors were drawn there. The secularization of 1803 interrupted the normal life of the monastery, but in 1835 the monks returned, and the brewery resumed its work. Problems with profitability after World War I led to a short halt of production. But in 1923 the monastery again started production of beer, this time in cooperation with farmers. Over the years the Klosterbrauerei Reutberg brewery turned into quite a large enterprise, remaining one of the few brewing cooperatives in Bavaria. 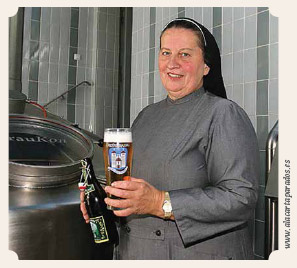 The monastery in the city of Mallersdorf is known because its brewery is operated by a woman. Sister Doris Engelhard in 1969 got the diploma of a brewer and since then every Sunday brews beer. She is one of the nuns of a big female community of the Franciscan order numbering more than 400 people.
From the moment of foundation of the monastery in the X century and to its secularization it belonged to the Benedictine order. But even after the property was taken from the monks and sold out, the brewery continued to work as a part of a farm. In 1869 the community of Franciscan sisters redeemed part of the monastery. In 1881 beer production was resumed, and in 1913 sisters got the rest of the former Benedictine abbey. Volumes of output of Klosterbrauerei Mallersdorf are very small, and its range consists of several main sorts and a seasonal sort of beer. 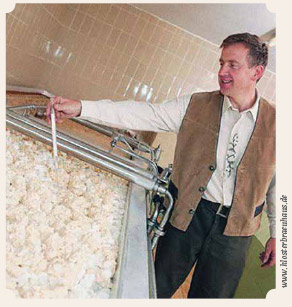 Franciscan community of Sankt-Josefskongregation Ursberg lives in the Bavarian town of Ursberg. Beer was brewed in Kloster Ursberg as early as 1623, but as a result of secularization the monastery was disbanded. At first a court worked in its premises, and then a shelter and a hospital for mentally challenged people were opened there. To look after the patients a big Franciscan community of sisters was also restored. In the hotel for pilgrims and tourists the brewery and Klosterbrauhaus Ursberg restaurant work, and in the summer visitors can have a rest and eat in a beer garden at the restaurant.
The Augustinian Order is the general name for groups of the Christians living according to Saint Augustine’s Rule. This rule is one of the first sets of rules for people who would like to lead spiritual life similar to monks. The Rule of Augustinians had a great influence on formation of a stricter Rule of Benedictines.
The founder of Protestant church himself belonged to the Order of Augustinians – Martin Luther who broke considerable part of governors, priests and flock away from Rome. After the order’s blossoming in the XVI century when it totaled to 30 000 members, the Reformation and the French revolution practically destroyed it, and younger Catholic movements adopted the dominating role. Therefore today there isn’t much that speaks about numerous monasteries of Augustinians in the late Middle Ages, many of which brewed beer. We found a mention only of four operating breweries in Germany which have some relation to Augustinian monasteries.
One of the breweries was founded in 1839 by a tavern keeper from the city of Eschwege, the State of Hessen. In 1875 the equipment for beer production was transported to the empty premises of the former Augustinian monastery which was bought by the owners of the brewery. And in 1908, as a result of merges, the company which received the name Eschweger Klosterbrauerei was formed. Production volumes of the enterprise are quite great – up to 1 million dal of beer. The majority of beer sorts emphasize continuity of the company to Augustinian brewers. 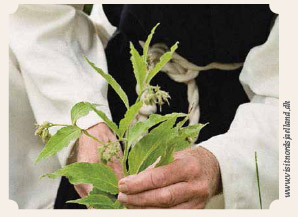 The second brewery is connected with the monastery in Bavarian city of Munnerstadt which in 1297 was founded by Augustinians. It is considered that beer in the monastery started being brewed in 1381. Kloster Munnerstadt did not fully repeat the sad destiny of many monasteries in medieval Europe. Country revolts of the XVI century were especially cruel in Franconia * and monks had to escape, and their structures were destroyed. But in 1652 the first four brothers returned, and in 10 years the construction of a new building of the monastery began. During secularization the monks didn’t lose their property, and over the years the monastery thanks to efforts of a great number of craftsmen became more beautiful, having turned into “a pearl of Franconian Rococo”. 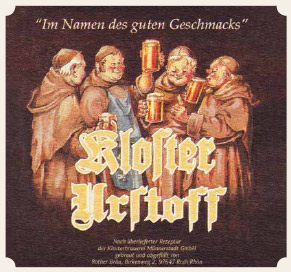 In 1978 the monastic brewery was leased to individuals, and in 2005 the Rother Brau Company began production of beer for the monastery under the contract. In 2010 Rother Brau, as far as we know, acquired exclusive rights for the use of the monastery’s name and production of beer at the monastic brewery itself was phased down. Today the company bottles Klosterbrauerei Munnerstadt Kloster Urstoff beer with the image of a company of four cheerful monks.