Numerous mendicant orders – Franciscans, Carmelites, Dominicans, and Augustinians – left a huge trace in the history of mankind, but a smaller trace in brewing, for one simple reason. Unlike Benedictines they considered economic activity subsidiary, distracting brothers from way to God. Some orders didn’t even own property though it wasn’t an immutable rule. Nevertheless, a number of the largest beer brands are connected with mendicant orders due to use of their names.
Catholic Bavaria, of course, is notable by a lot of brands appealing to church. Faces of monks on their labels became world renowned “face” of the Bavarian beer. Especially it is worth accentuating Munich three of Augustiner, Franziskaner, Paulaner, and also Kapuziner from Kulmbach. However, today the church doesn’t take any part in the production of these brands. 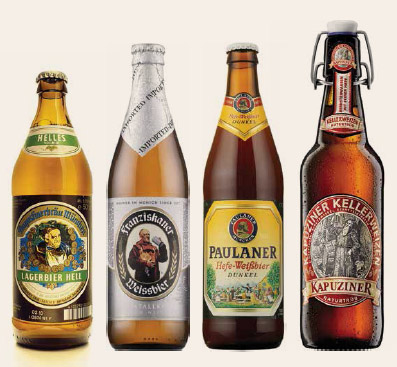 Similarly, since 1328 up to the secularization of 1803 the monastery of Saint Augustine brotherhood brewed beer with the corresponding name – Augustiner. After the brewery was transferred from the church to private hands there was a repeated change of the production site, but the name of the brand remained and there remained an image of an elderly monk on the label. 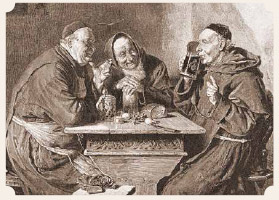 Wheat Franziskaner beer – another wordly known brand, has only indirect relation to church, despite the image of the Franciscan monk. In the Middle Ages this order tried to disassociate itself from economic activity. This ancient brewery was simply founded near the monastery.

One of followers of Saint Francis and his ideas of monastic poverty was also called Francis. He lived in the city of Paola and founded the Order of Minim Brothers known for the asceticism in the beginning, and subsequently for its scientific and teaching activity. At the beginning of the XVII century Minim monks founded a brewery in Munich, which soon moved into private hands. But Francis from Paola is represented on the label of the largest exporting brand – wheat Paulaner beer.

Bavarian company Kulmbacher Brauerei in 1987 expanded its range, producing a wheat sort of beer – Kapuziner, thereby occupying a free niche among known Catholic orders. The Capuchins were one of the largest branches of Franciscans and were actively engaged in missionary activity. According to the site of Kulmbacher Brauerei, their beer is brewed by ancient rules of abbey brewing, in particular in traditions of “the country of Capuchins”, where the roots of German wheat beer originate.

A similar example of name use of a mendicant order is not German, but Belgian Triple Karmeliet beer. Their succession is that brewers of the Bosteels Brewery company appeal to the original recipe of beer which is dated 1679. According to the legend, it originates from the monastery of Carmelites in Dendermonde, Belgium. However in that case the brewers didn’t need monk’s image.