It is shaping up to be one of the final chances to grab a beer group of any scale. Foster’s is preparing to split itself into two, triggering a race for both its wine and beer divisions.
The Melbourne-based drinks group is expected to announce plans to demerge its host of well-known lagers from their unsuccessful marriage with the grape next week.
Its Treasury Wine Estates arm – maker of Penfolds, Wolf Blass, and Rosemount – is uncorking itself from Carlton United Breweries (CUB), owner of Foster’s, Victoria Bitter and Carlton Draught.
It’s a move the rapidly consolidating beer world has long awaited. 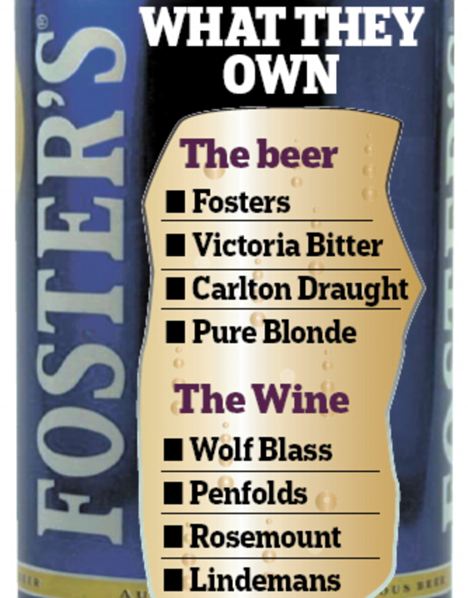 London-listed SAB Miller is mulling a ?7bn move on CUB but is likely to face stiff competition from Japan’s Asahi Breweries.
Foster’s wine business has always been the poison pill standing in the way of any sale because brewers did not want to be saddled with non-core booze assets. Back in the late 1990s it embarked on what it called a multi-beverage strategy. It bought some mass market wine brands arguing that delivering wine to the same pubs, restaurants and supermarkets that already stocked its lagers would cut costs.
All went well until it plunged into wine in a big way – splashing out a toppy ?5bn buying rival Southcorp in 2005. Foster’s quickly gained one third of the total booze market and Australia’s supermarkets sought to reduce their reliance on Foster’s cutting orders.
This happened at the same time as Chile managed to produce cheaper wines and the Australian dollar went in the wrong direction, meaning wine exports made less economic sense. It soon suffered an acquisition hang-over and a series of write downs to the tune of ?2.5bn followed.
Failing any last-minute hitches, when Foster’s releases its first-half update next Tuesday, insiders say it will issue a scheme of arrangement, firing the starting gun for a summer demerger.
Michael Ullmer, a non-executive director, effectively hoisted the ‘for sale’ sign telling the Daily Mail: ‘It’s not for the company to go and market itself – it’s up to other companies to approach us.’
American private equity firm Cerberus did stage a failed ?1.6bn bid for the wine business at the end of last year. As for the CUB, some observers have questioned the value Australia’s low growth beer market would have to SAB, which is seen as specialising in emerging markets.
One suggested any bid would be a protective move to prevent rivals from gaining scale. But sources close to SAB argued the brewer would never make an acquisition for defensive reasons.
Foster’s has been haemorrhaging market share and the source said: ‘SAB has a good track record in turning businesses around and if it were to bid it would be because it could see some value growing Foster’s stable of beers.’
The two businesses are likely to be separated in the summer but there is a case for bidders to move early. By teaming up with private equity they could pre-empt rivals and try to elicit an agreed bid, breaking up the business themselves.