A beer so powerful just one gulp would push you over the drink-drive limit has gone on sale.
Sink The Bismarck is believed to be the strongest beer in the world with a 41 per cent alcohol content. Brewed by Scottish firm BrewDog it costs ?55 for a 330ml bottle.
The drink, which works out as ?95 per pint, has four times as many hops than ordinary beers, say its makers.
The beer is supposed to be drunk in small quantities because it is so strong and has been designed with a screw top so it can be resealed. 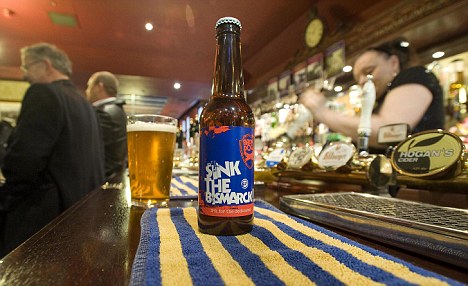 Sink The Bismarck is believed to be the strongest beer in the world with a 41 per cent alcohol content. Brewed by Scottish firm BrewDog it costs ?55 for a 330ml bottle 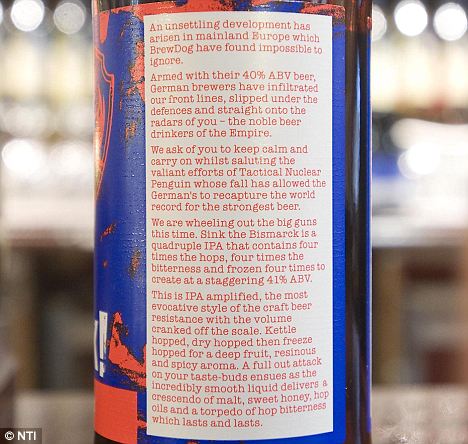 Now a pub in Birmingham has put the controversial beverage behind the bar.
Nigel Barker, landlord at the Wellington, told the Birmingham Mail: ‘It has to be drunk in moderation because of its strength but we have sold several bottles.’
The taste for extra-strong beers has seen other brands appear on the market and an off licence close to the pub is selling one which is ‘just’ 32 per cent alcohol and also sells at ?55 for a 330ml bottle.
The high alcohol content means a 50ml serving would be the equivalent of consuming two glasses of wine.
The label warns: ‘This is an extremely strong beer; it should be enjoyed in small servings and with an air of aristocratic nonchalance – in exactly the same manner that you would enjoy a fine whisky, a Frank Zappa album or a visit from a friendly yet anxious ghost.’ 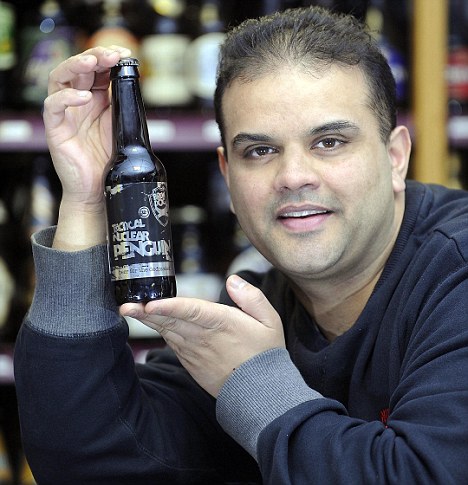 Harpal Rai, 34, off-licence owner, says he has sold four bottles of powerful Tactical Nuclear Penguin beer. He said: ‘We tend to sell it more to the wealthier client, like doctors and lawyers, not only because of the price, but also for the taste too’

Harpal Rai, 34, owner of the Rai Wine Shops off-licence, said he has sold four bottles of the beer.
But Jack Law, of Alcohol Focus, said the super strong drink was a ‘cynical marketing ploy’ which could encourage irresponsible drinking.
He added: ‘We want to know why a brewer would produce a beer almost as strong as whisky?
The fashion for super-strength booze comes at the same time that the Government has ordered a crack down on binge drinking.
Pub and club promotions that encourage drinking to excess will be banned in a retreat from a previous policy of liberalising licensing laws.
Licensees face fines of up to ?20,000 or up to six months in jail for offers such as ‘All you can drink for ?10’, or ‘Free drinks for women under 25’.
But Harpal said the super strong beers are not aimed at the younger market and claimed they would not encourage irresponsible drinking.
‘The beer is more for the discerning customer who likes quality and appreciates the drink,’ he added.
‘We tend to sell it more to the wealthier client, like doctors and lawyers, not only because of the price, but also for the taste too.
‘They are brewed like a very good whisky hence the long wait in receiving the stock.’
Managing director James Watt from BrewDog said: ‘This beer is about pushing the boundaries, it is about taking innovation in beer to a whole new level.’
He added that a beer such as Tactical Nuclear Penguin should be drunk in ‘spirit-sized measures’.