With the weather heating up and summer in full swing, Americans will be slaking their thirst with a variety of fizzy, sweet and intoxicating beverages. 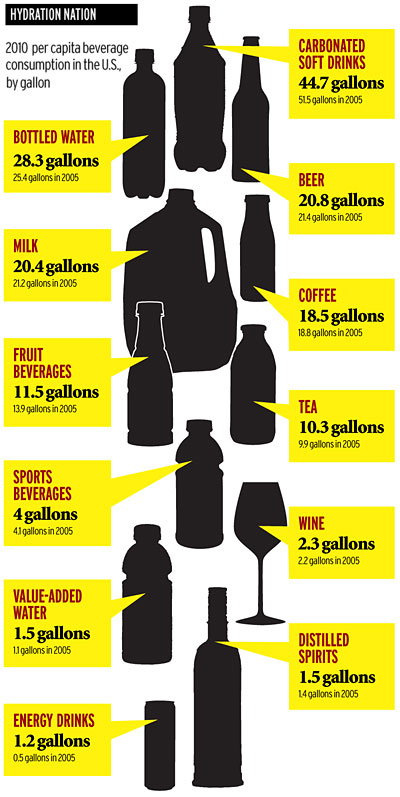 Soda is still the most-consumed beverage in the U.S., with the average consumer chugging nearly 45 gallons of the fizzy stuff last year. So it’s no coincidence that three of the biggest measured-media budgets in the beverage category belong to soda brands. According to Ad Age’s Leading National Advertisers report, Coke spent $267 million last year, while Pepsi shelled out $154 million and Dr Pepper spent $104 million.

Beer ranks as the most-consumed alcoholic beverage, though spirits and wine, perceived by some to be more healthful, have been gaining ground in the past few years. Still, last year, the average American threw back nearly 21 gallons of brew, or about 168 pints. The category also commands major marketing dollars, to the tune of $1.25 billion spent on measured media last year. The category’s biggest spender, Anheuser-Busch InBev, shelled out $555 million.

Interestingly, the bottled-water category, which includes bulk containers, as well as single serve, has been growing, indicating that noise around consumers’ perceived environmental concerns has been overblown. Also worth noting, the energy-drink category has more than doubled with a slew of new entrants as well as innovations in the form of energy shots.

But, Mr. Hemphill added, some of the consumption trends can be attributed to economic factors as well. “White-collar consumers fared better through the economy than blue-collar consumers, so what we’ve seen is mass market, traditional categories like carbonated soft drinks and fruit beverages underperform the market, while some of the more premium categories, like ready-to-drink teas and energy drinks, have outperformed the market,” he said. “To some extent that’s consumer tastes, but it’s also this tale of two different consumers in a weak economy.”