Since January 2016, the prices of beer in the dealer networks and retail stores in Vietnam have increased sharply. The reason for this jump was the introduction on 1January 2016 of a new special consumption tax (SCT). 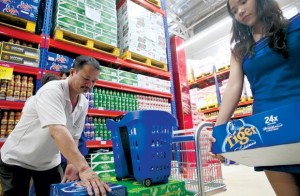 For example, in the supermarket chain Citimart the price of beer “333” has increased by 6000 to 226 000 dong per box. Earlier, in May 2015, the chain of Lotte Mart received notification of the increase in selling prices for the production of brewers by 1.7 – 2.7%.

Although the annual increase in the excise tax is 5%, it will inevitably affect the cost of production and the price of beer will increase by 7-8% from the current.

Indeed, besides the excise tax, the price of beer has been greatly influenced by the demand. With the New Year coming, the price of a box of beer has been increased from 15,000 to 30,000 dong during the week. According to Le Ngoc Dao, Deputy Head of the Department of Industry and Trade of Ho Chi Minh City, the demand for beer to about 40 million litres is expected, i.e. 30% higher than the average for the month.