One of Indonesia’s oldest red-light districts was demolished on Monday in an operation overseen by hundreds of police and troops, as authorities press on with a plan to close all brothel areas in the Muslim-majority country. 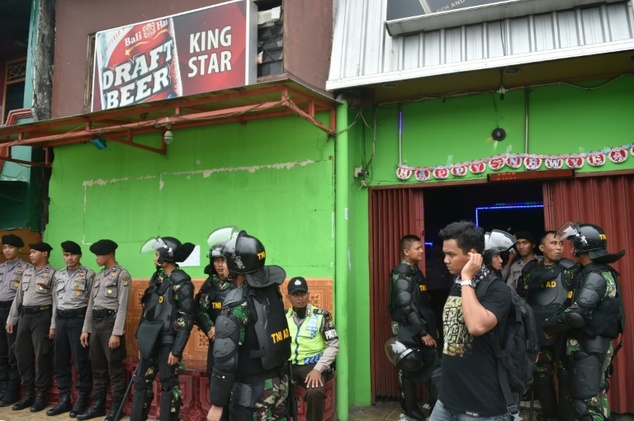 Dozens of illegal bars and brothels along a polluted riverside strip in north Jakarta — known locally as Kalijodo — were reduced to rubble by excavators.

The bars — many marked by neon beer signs and illustrations of beautiful women luring men — were torn down by the machines in a matter of minutes, leaving behind nothing but splintered wood, brick and old mattresses.

Elsewhere police searched a three-storey hotel for any remaining residents before a digger ripped the entire structure to the ground with a spectacular crash.

North Jakarta Mayor Rustam Effendi, who oversaw the demolition, said the buildings were illegal and the demolition would make way for a public park.

“There was open prostitution there and all kinds of other things as a result, like liquor,” he told AFP.

During the eviction of residents over the past week, police seized and destroyed large quantities of alcohol.

The plan angered long-time residents and there had been fears that protesters would try to disrupt the demolition. But thousands living in the area agreed to leave in the days beforehand and the operation went smoothly.

Jakarta authorities decided to take action after a fatal car accident early this month blamed on a man who had been drinking in the riverside shanty area.

One elderly food vendor welcomed the idea of a park in the area, but another was worried the destruction of Kalijodo would hit his business.

“For sure it will be less,” Agus Cendol told AFP.

Prostitution is illegal in Indonesia but is rampant in major cities.

The government last week instructed local authorities to shut down an estimated 100 red-light districts across the world’s most populous Muslim-majority country.

Local governments, which have substantial power, have already closed dozens of red-light districts in recent years.