Silhouetted against pastel-colored shophouses in the historic Chinatown district of Singapore, Daniel Goh leaned forward at a lime-green table on the second floor of the Chinatown Complex to take a break from his animated critique of the city-state’s rapidly developing craft beer scene. “The thing most people don’t know,” he said, “is that people used to come here to die.” 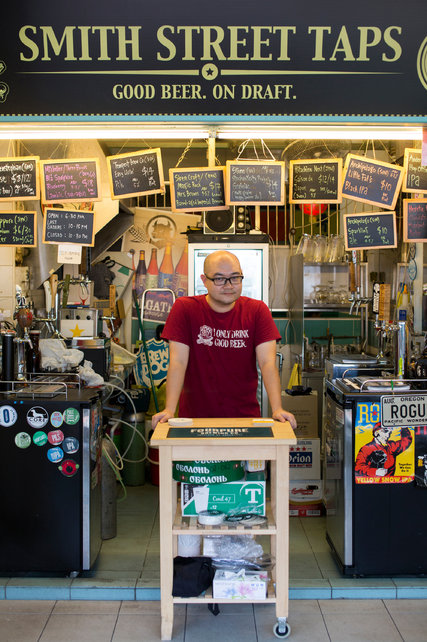 Mr. Goh referred to nearby Sago Lane, which was called “Death Alley” in the first half of the 20th century because of its many funeral parlors and coffin shops, and the grim custom of some Chinese citizens going to these so-called death houses when they were about to die.

The government outlawed such places in 1961, and many of the area’s funerary traders had long vanished by the time much of Sago Lane was leveled to make way for the labyrinthine Chinatown Complex, whose exterior is brightly adorned with incandescent Chinese paper lanterns strung in zigzags above the busy street below.

Home to hundreds of food stalls and sundries shops, the structure is one of Singapore’s older hawker centers, or open-air food courts. The government built more than 100 of them from 1971 to 1986 while authorities, citing waste-management and public-health issues, enticed the island’s tens of thousands of food vendors from the streets to these facilities with multiple stalls and promises of low rent.

Though the move robbed Singapore of the lively street-food culture celebrated in many other parts of Southeast Asia, today the rough-and-tumble hawker centers thrive as community gathering spaces and lively eating houses. Here local chefs serve myriad foods hot, fresh and cheap, from Singaporean specialties like laksa (a rich, spicy, coconut broth-based soup) and chicken rice to Indian, Thai, Indonesian and even Western staples like hot dogs and spaghetti.

It was the affordable Chinatown Complex rent, minimal start-up cost and the chance to pair beers with all these local foods that in 2011 inspired Mr. Goh, 40, to open the Good Beer Company, Singapore’s first hawker stall specializing in craft brews. Offering a choice of some 60 imported bottles, the stall proved so successful that in January 2014 Mr. Goh partnered with a fellow beer merchant, Meng Chao, 47, to set up another stall, Smith Street Taps, right next door.

While Good Beer Company deals in bottled beers, Smith Street Taps began as the first Singapore stall hawking craft on tap. “It was a risk,” said Mr. Chao. “Bottles can sit on shelves, but with draft we have to turn kegs around quickly.” 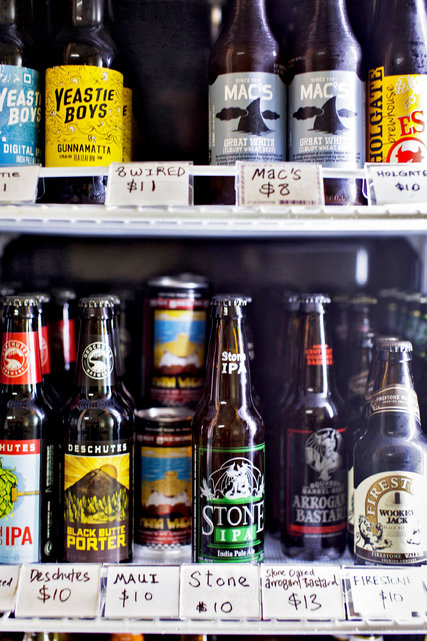 Thus far that hasn’t been a problem. Now up to 11 taps from its initial seven, Smith Street Taps fast became the de facto center of Singapore’s nascent craft beer scene, going through its 20- to 30-liter kegs within two or three days. Some beers, such as the Bomb! imperial stout from the Oklahoma-based Prairie Artisan Ales, last less than a night. “People come for beers they’ll never, ever get to try, sometimes even if they travel to their source,” Mr. Goh said.

At Smith Street Taps, many local importers introduce overseas breweries to Singapore via tap takeovers, when a range of beers from a single brewery flow from most taps. Siren Craft Brew (Berkshire, Britain), Baird Beer (Numazu, Japan) and Modern Times Beer (San Diego, Calif.) are among those that have been featured at such periodic events. “It was a great night; we showed up early and stayed late,” said Matt Walsh, the head brewer at Modern Times, who traveled to Singapore for the occasion. “I was really impressed with the knowledge and enthusiasm of everybody there.”

Aside from its world-class tap list and compelling, nontraditional setting, Smith Street Taps succeeds by selling premium beers at prices far lower than those found at brick-and-mortar competitors. They can do so, in part, because their overhead is much lower.

According to Singapore’s National Environment Agency, as of Dec. 31, 2014, 87 percent of hawker stalls rent for less than 1,500 Singapore dollars (about $1,065) a month, a fraction of what many centrally located bars pay.

Of course, now that the pair has kick-started this craft beer hawker phenomenon, the model has caught on. At Chinatown Complex, for instance, the brothers Patrick Lim, 61, and Steven Lim, 63, opened OnTap a few stalls from Smith Street Taps in late 2014. The approach is similar, though the Lims pour only OnTap’s own beers and ciders, brewed in small batches less than 10 miles away in central Singapore. OnTap now manages stalls in the Chomp Chomp and Sun Court hawker centers, too.

As far as Mr. Chao is concerned, upstarts like OnTap aren’t necessarily competition — they’re a sign of progress. “It’s still about growing the market and just getting more people drinking good beers,” he said.