A group of lenders led by State Bank of India on Monday sought to strongly refute the United Breweries Group chairman Vijay Mallya’s contention that they, needing to recover over R9,000 crore from him, have no business to know about his overseas assets. The banks iterated that his personal guarantee “subsisted” and was a “major source of recovery” for them given that petitions seeking winding up of his two insolvent companies — Kingfisher Airlines (KAL) and United Breweries Holdings — are pending in the Karnataka High Court.

In their reply to the affidavit submitted by the embattled businessman to the Supreme Court last week, the banks urged the court to “take a serious view” of Mallya’s defiance of its order and said that his non-disclosure of assets “do not enable it (the consortium) to assess his ability to repay” or arrive at “considered view for acceptance or otherwise of any negotiated settlement offer”.

Vijay Mallya’s refusal to disclose overseas assets indicated his lack of bona fides and is an express attempt to obfuscate facts and suppress vital information, the lenders said. 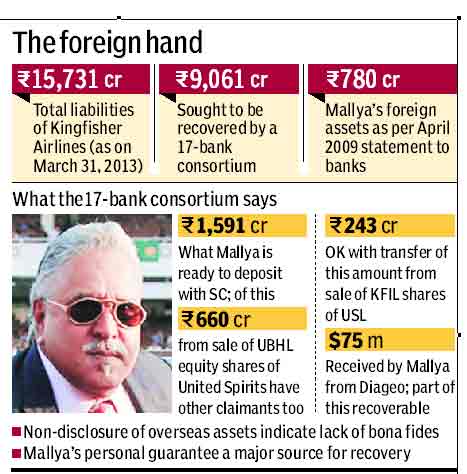 The lenders claimed that they had no knowledge of the `1,329 crore lying with the Karnataka HC, including `379 crore as FDs with Laxmi Vilas Bank.

According to the consortium, the liquor baron’s stand that he and his family are not obliged to disclose overseas assets is false as he in his statement of assets during restructuring of loans furnished to banks on April 9, 2009, had included overseas assets worth `796 crore and his obligation as a guarantor is subsisting and the banks have a right to proceed against Mallya’s assets “anywhere in the world”.

Also, the banks pointed out, no information was given by the UB chairman about $40 million, a part of $75-million payout package signed with London-based Diageo. This amount, according to the bankers, ought to be considered as one of his assets for recovery purposes.

The banks also alleged that revocation/suspension of passport by the ministry of external affairs is being used “as a ruse to avoid participation” in the proceedings before the Supreme Court and the same deserves to be deprecated. Mallya left India for the UK on March 2.

According to the bankers’ affidavit, suspension of his passport allows Mallya to approach the Indian High Commission in London for issuance of an emergency certificate which leaves enough room for him to indicate the probable date of appearance before Supreme Court. Now even after revocation of passport, he can still return to India by approaching the High Commission, the banks said in response to Mallya’s stand that suspension of his passport and issuance of non-bailable warrants against him have created impediments in the whole process of settlement of loans.

On the liquor baron’s claim that defunct KAL, whose liabilities amounted to `15,731 crore, was a commercial failure and global meltdown made things worse for it, the consortium said that such defence is not “valid in the eyes of law”. The group of 17 banks is seeking dues of over `9,000 crore from Mallya for loans made to KAL, which stopped flying in 2012.