Vietnamese, from economists to housewives, now are talking about the presence of Thai manufacturers in nearly all business fields. Thai products have been flooding the Vietnamese market, from footwear to toothpaste, from electric household-use appliances to cosmetics.

Experts have warned that more and more Thai goods will penetrate the domestic market, especially when they are backed by powerful distribution networks. 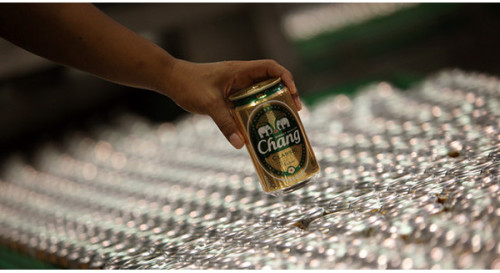 Sources said it was highly possible that Vietnamese would also have Thai beer to drink in the future.

Sabeco has submitted to the government the plan to divest 53 percent of Sabeco’s stakes to reduce its ownership ratio from 89 percent to 36 percent.

The sources said more than 10 investors, both Vietnamese and foreign, have registered to buy Sabeco’s stakes. There are big names among Vietnamese potential investors, such as Saigon Securities Incorporated (SSI), Anh Duong Company and Duc Binh Group.

Meanwhile, Japanese Ashahi, Dutch Heineken, Thai ThaiBev and US SAB Miller are included on the list of foreign investors.

Of these, ThaiBev is believed to be the most active investor who shows strong desire to buy Sabeco’s stakes.

The information about Sabeco’s sale of 53 percent of stakes appeared in mass media first in November 2014. At that time, ThaiBev, which owns Chang beer and Oishi green tea brands, expressed its willingness to buy the lot of shares, valuing Sabeco at $2 billion.

At that moment, Sabeco held 46 percent of the domestic market share with two well-known brands – 333 and Bia Sai Gon.

In early 2015, ThaiBev once again voiced its wish to buy 40 percent of Sabeco’s stakes at $1 billion, which means total value of $2.5 billion for Sabeco. However, the deal failed as Sabeco thought the offered price was lower than its actual value.

Analysts commented that ThaiBev is attracted by the Vietnamese attractive market. With 90 million people, in the first four months of 2016, Vietnam consumed over 1 billion liters of beer, or 10 million liters a day.

If ThaiBev can acquire Sabeco, it would be able to have 40 percent of the domestic market.

The owner of ThaiBev proves to have good understanding about the Vietnamese market. He now holds 11 percent of Vinamilk through Fraser & Neave, a subsidiary, and runs 5-star hotel Melia Hanoi through TTC Land.