Villagers of Melasirubodhu and Kattoorani, including large number of women, thronged the Collectorate here on Monday, demanding closure of TASMAC shops, posing problems to the local people and disturbing social harmony. 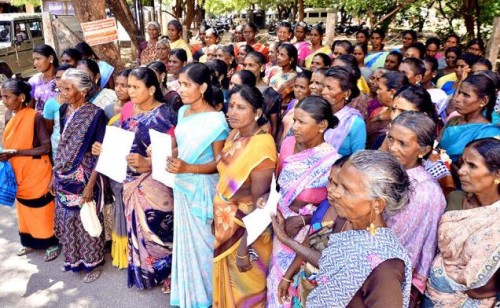 T. Dinakararaja, an advocate who led the people of Melasiruphodu, said the peace-loving residents faced problems, ever since the TASMAC retail shop, which was originally located elsewhere, was shifted to the present place in a residential area three years ago.

He said the shop posed lots of inconveniences as it was located close to the Primary Health Centre on one side and bus stand on the other. Those who visited the shop polluted the pond, used by local women for taking bath by throwing away plastic wastes and bottles, he said. They made several representations to the authorities to close down the shop but they turned a deaf ear to their demands, he said and threatened to launch series of agitations if the shop was not closed down at the earliest. Collector S. Natarajan has assured to consider the demand, he added.

Villagers of Kattoorani also urged the Collector to close down two shops in their area. S. Kumaraguru and villagers who presented the petition said they have been facing problems for three years as one shop was located inside a residential area and near a temple and the other shop near a Oorani (waterbody), from where women fetched water.

Mostly outsiders visited the two shops, disturbing peace and social harmony, Mr. Kumaraguru said. The tipplers consumed liquor in the open and entered into brawls causing nuisance to the local people, especially to school students and women, he said.

Meanwhile, S. Vellaidurai, Additional Superintendent of Police (Prohibition and Enforcement Wing) said after the government decided to close down 500 retail liquor shops throughout the State as part of its decision to implement total prohibition in a phased manner, 10 to 15 shops might be closed in the district but those shops are yet to be identified.