It’s been two weeks since Tamil Nadu Chief Minister Jayalalithaa signed the file to down shutters of 500 Tasmac shops across the State and reduce the operating hours of outlets. But if the trend in Chennai is any indication, there has not been any drastic dip in sales, and it is business as usual for many of the outlets. 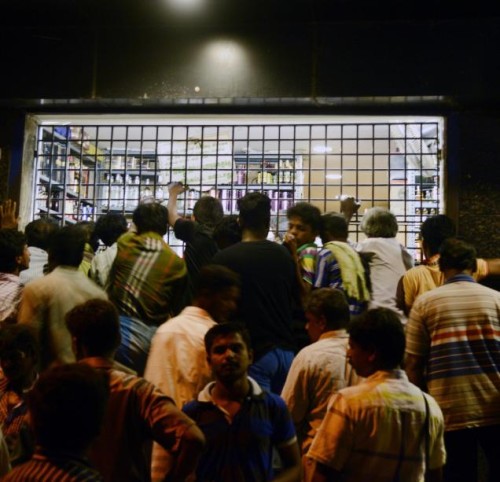 At an outlet near Chepauk Stadium on Tuesday, more than 20 people were standing in queue at 11.45 a.m. waiting for the shop to open. “There has been no impact on sales. The footfalls have not dwindled,” said the salesperson at the counter. This outlet sells liquor worth Rs. 4 lakh a day.

At an outlet near Choolaimedu, which borders areas including Kodambakkam and Vadapalani, liquor is purchased in bulk the previous night and sold in black in the morning at a higher price. The manager at the Choolaimedu outlet said, “Curtailing the time in the morning has hardly made any impact. There are people who buy from us the previous night and sell it outside before 10 a.m.”

Tasmac outlets in places including T. Nagar, Kodambakkam, Poonamallee, Guindy, Triplicane, Velachery and Ambattur are witnessing brisk business, and in some locations, sales have increased by 10-15 per cent.

“Even though shops open at 12 noon in some places, the bars open earlier and sale of liquor is happening there,” said a Tasmac union member.

Contrary to the general trend, sales of shops in localities like Egmore and Koyambedu have dipped marginally. The reason: workers who do night shifts here leave for home by around 9.30 a.m. and do not stay back till the shops open.

A salesperson at an outlet in Egmore said, “People who work in and around the railway station come here for a drink in the morning, and now with the time restriction, they leave for home once they finish work.”

The outlet usually sells liquor worth Rs. 3.5 lakh a day and this has come down by 20 per cent. Similarly, at an outlet near Chintadripet market, sales have come down to Rs. 2 lakh a day from Rs. 2.5 lakh a day. “People working in the fish market come here in the morning after their work. Those tipplers are now leaving as the shops open late,” said a person in charge of the outlet.

District Collectors across the State have sent their first list to Tasmac.

“We have received a list of more than 1,000 outlets which officials feel are sensitive and need to be closed. The team is working on short-listing the first 500,” an official said. About 70 lakh people, less than 10 per cent of the State’s population, consume liquor at these outlets every day.