The world’s leading brewers all operate in Vietnam, competing with Vietnamese manufacturers to grab market share. 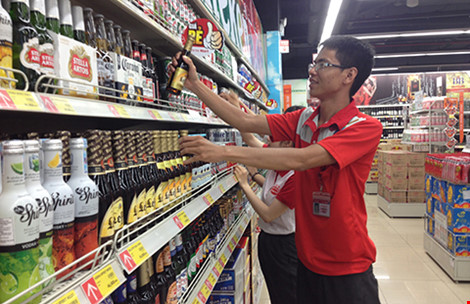 Le Hong Xanh, deputy general director of Sabeco, the largest Vietnamese brewery, told Sabeco’s shareholders at a meeting that the company’s market share in 2015 increased by two percent compared to 2014, to 43 percent.

However, Xanh also said Sabeco would have to face challenges ahead as more and more foreign brewery groups have come to Vietnam to scramble for the pieces of the lucrative market.

Xanh and other Vietnamese breweries have every reason to worry about the presence of foreign brewers in Vietnam. Frans Eusman, President of Heineken Asia Pacific, told the local press that Heineken has been pouring money into Vietnam because the country is the second most profitable market for the brewery, after Mexico.

Not only Heineken, a series of other big breweries in the world consider Vietnam a fertile land to exploit. Thai manufacturers are believed to begin implementing a plan to penetrate the Vietnamese market that began five years ago.

Soon after Sabeco and the Ministry of Industry and Trade submitted to the government the plan to sell a 53 percent stake and reduce the state’s ownership ratio from 90 percent to 36 percent, ThaiBev, Thailand’s largest brewery, expressed its willingness to buy 40 percent of Sabeco’s stake.

Analysts commented that if ThaiBev can acquire Sabeco, the company with the largest market share, it would be able to control the Vietnamese market.

“If Thailand can acquire Sabeco’s stakes, they will surely control not only the brewery’s output, but the market share as well,” said Nguyen Van Viet, chair of the Vietnam Beverage Association (VBA).

Other foreign groups, namely Ashahi from Japan, Heineken from the Netherlands and SAB Miller from the US also showed interest in Sabeco’s stakes.

Mikio Masawaki, general director of Sapporo Vietnam, said that they world’s breweries had chosen to expand their business because the market showed a high and stable growth rate.

A VBA report showed that in 2015, Vietnam consumed 3.4 billion liters of beer, an increase of 10 percent over the year before and 41 percent over 2010.

Vo Thanh Ha, general director of Sabeco, said there were some changes in Vietnamese taste with more high-end products consumed. This will be both an opportunity and challenge for domestic breweries because they still don’t have high-end products.

Meanwhile, foreign breweries want to conquer the market segment. Beer imports from Germany, Czech Republic, Belgium, Japan and Mexico all have been available in Vietnam, while products with Shingha and Ashahi brands from Thailand can be found easily everywhere.