Some Yangon beer stations are still flouting a long-ignored law against selling draught beer without a special licence, which local authorities recently started trying to enforce. Those that have followed the letter of the law, meanwhile, are seeing business slump. 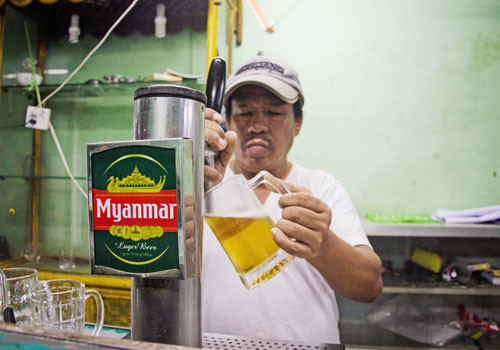 Most beer stations across the country have served draught beer for many years under an FL17 licence, though officially this is prohibited by law. But last month station managers offering draught beer received letters from ward administration offices telling them to stop.

Ward administration offices are under control of the General Administration Department, which is overseen by the military through the Ministry of Home Affairs.

Sales are down around 30 percent since then, he said, with customers moving to the few beer stations that have not stopped serving.

Other beer station owners that have chosen to abide by the law and close pumps also report a sharp fall in profits.

Most stations in Mingalar Taung Nyunt township with FL17 licences have stopped selling beer on tap, said U Thein Than Win.

But in other townships beer station owners report that draught beer still flows at unlicensed bars.

Bar owners with an FL17 licence that continue to sell draught beer and are caught will be punished, but as ward offices have not enforced city-wide inspections many beer stations are continuing to pour.

U Hla Win Tin, director general of the liquor and tax department under the Ministry of Home Affairs, said that the crackdown was simply an application of the Liquor Act and its regulations.

That act states the only people allowed to sell draft beer are those with the correct licence, he said.

Of the approximately 7000 bars and restaurants that sell tap beer today, only around 2500 hold an FL9 or FL10 licence specifically allowing them to sell draught beer.

Some beer station owners with only an FL17 licence are hurriedly trying to apply for an FL9, including U Tin Shwe who owns Maw Shwe Li station in Tarmwe township. He applied two weeks ago in search of a solution to avoid shutting his pump.

But the Ministry of Home Affairs has said it will not issue more licences, and following U Tin Shwe’s application he was visited by a small army of officials, including the township administrator, the ward administrator, a member of the city development committee and a high-ranking official from the township police station.

When they found out he was selling draught beer with only an FL17 licence, they told him to stop.

U Tin Shwe said it would be one thing if the new law was imposed uniformly across the ward, but other beer stations are still selling draught beer with only an FL17 licence.

He is losing customers to rival beer stations that have either not been asked to close or have not responded to official instructions. U Tin Shwe said he is considering flouting the law and selling draught beer again to avoid losing business.

As the ministry is no longer selling licences the only way to acquire an FL9 is from an existing licence holder, U Tin Shwe added.

The licences can be bought and sold, but are only valid at the address for which they were originally issued. The crackdown has pushed up the price of FL9 licences accordingly, from K40,000-K50,000 before it began, to K70,000–K80,000, U Tin Shwe said.

Swe Tha Har resturant in Magwe Region sent a petition letter to the local police department asking for permission to sell tap beer with an FL17 licence, which was rejected.