Only about 10 percent of the places serving liquor in the country are legally allowed to do so, tourism experts say, and while the widespread availability of unlicensed premises serving drinks is costing the local economy in unpaid taxes, the Ministry of Home Affairs refuses to issue more licences. 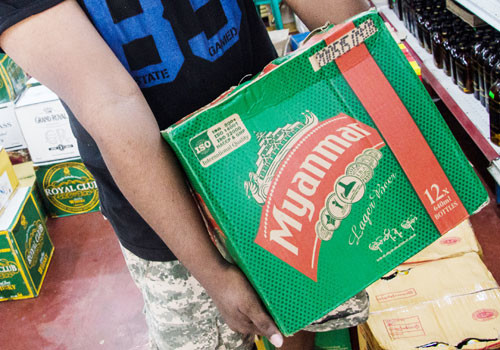 The Liquor and Tax Department, under the home affairs ministry, has issued only 41,153 liquor licences for the whole country, U Khin Aung Htun, joint secretary of the Myanmar Tourism Federation, told The Myanmar Times in a recent interview.

Many hoteliers believe the right to serve liquor is granted as part of the hotel licence issued by the Ministry of Hotels and Tourism, but they are wrong, he said. A separate licence to serve alcohol must be obtained from the Ministry of Home Affairs.

“Bagan has only four licensed restaurants and about 30 hotels with a licence to serve drinks. All the others operate on the basis of an understanding with township administrators,” he added, hinting at a below-the-counter system.

And he said only one in every 10 of Yangon watering holes is legally licensed, contributing to a shortfall in tax duty.

Many bar owners allowed their licences to lapse when taxes were put up at the end of March 2015, preferring to strike a deal with understanding local officials, he added.

He would like to see the government bring in a policy that would encourage hoteliers and bar owners to get a licence and reduce the tax losses.

Restaurant and bar owners must pay income tax based on their net profits, as well as collecting a 5 percent commercial tax on each sale from customers.

Another problem, according to U Khin Aung Htun, is that the black market for liquor sales can drive up prices.

“Some owners bribe an administrator instead of paying for a licence. But they can end up paying more because they’re afraid of being arrested. They then put up the price of the drinks to cover the cost and everybody loses out – the bar owner, the customer and the tax office.”

The wine and spirits sold in such places also often enter the country
illegally, since the law forbids imports of foreign liquor except to duty-free shops at international airports, he said.

“The country will keep losing money over this issue as long as alcohol is being imported illegally. But [the government] also has to crack down on people who break the law.” He said the temptation to distil fake alcohol could bring health risks, and that the current system perpetuated corruption.

For U Myo Win Nyunt, a director at the Ministry of Hotels and Tourism, the problem is likely to grow as more tourists travel to the country.

The ministry expects as many as 7.5 million tourists a year to visit by 2020, and as formerly closed parts of the country in Kayin, Kayah and Chin states open up to tourists, the problem of unlicenced hotels will no longer be limited to Yangon and Bagan.

“We grant about seven hotel licences each month,” U Myo Win Nyunt said. “As of the end of July, we had already issued licences to 1361 hotels with 53,355 rooms. An international-standard hotel will have restaurants and bars, which require separate liquor licences, so we need a better
policy.”

But the tourism and home affairs ministries are directly odds over this question, with the Ministry of Home Affairs trying to keep the number of licences down, and the Ministry of Tourism wanting to attract more visitors.

“Policy at the Ministry of Home Affairs policy deters hoteliers from applying for a liquor licence,” said one distributor, asking to remain
anonymous.

“People who want to open a bar, restaurant or hotel have to get hold of a CS2A licence. They can buy a K200,000 licence on the black market for K2 million and trade it for an FL17 licence with the help of a friendly township administrator for another K8 or K10 million. That will allow them to trade imported liquor and wine, but not draught beer.”

The home affairs ministry is not selling any new liquor licences for the time being, which means that all new licences must be bought on the black market.

A CS2A licence covers only locally made alcohol, while an FL17 allows the bearer to sell imported liquor, wine and beer. For the sale of draught beer, a separate licence known as FL9 is required, for an annual fee of K1.2
million.

Tourism ministry director U Myint U said, “Hoteliers complain to us that the Ministry of Home Affairs takes too long to deal with their licence applications. Sometimes they’re rejected even though we have recommended approval.”

Bar owners meanwhile are still smarting from a ban on late-hours drinking.

One owner said, “The law requires us to close at 9pm, but the police used not to bother us until 11, unless the authorities wanted to set an example. But everyone knows that some places stay open all night.”