The place looks like a regular house in the suburban Pak Kret district, roughly one-hour drive out of Bangkok. Look closer, however, the house appears unlived, more like a warehouse with some sort of operation going on inside, and a walk round to its backyard reveals five massive hothouses which span 1,600m². 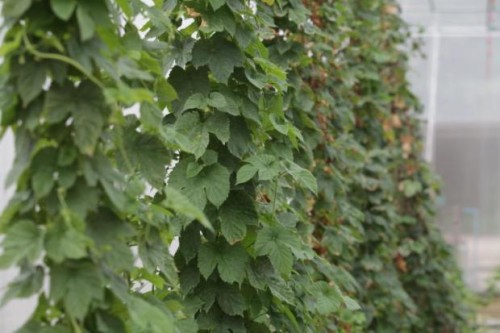 The place is actually Deva Farm & Cafe, arguably Thailand’s first hops farm, it has, since establishing the business last year, so far housed as many as 26 species of hop plant — the type of plant whose flowers are a key ingredient in beer brewing.

This farming initiative has come in a crucial yet controversial time: the past few years have seen a surge of popularity in craft beer — a term known for home-made beer or imported ones — among Thai producers and consumers while there’s still a law on prohibition on small-scale beer brewing in Thailand. 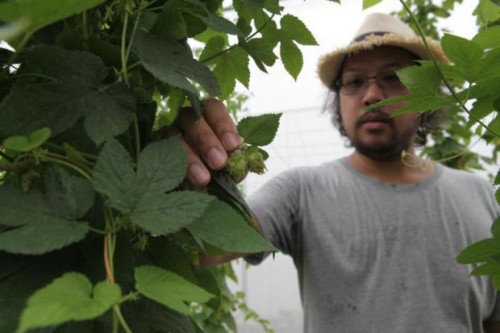 According to the law, beer brewing is only legal in two cases: with industrial-scale factory producing at least 10 million litres of beer per year, such as the two biggest Thai brands Chang by Thai Beverage or Singha and Leo by Boon Rawd Brewery; or with brew-pubs like Tawandang German Brewery, which produces and sells on-site at least 100,000 litres of beer per year. 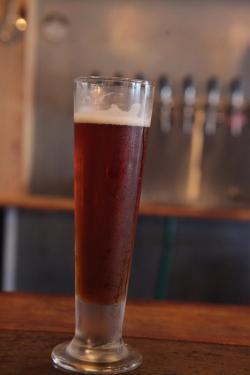 For founders of Deva Farm & Cafe, Nattachai Ungsriwong and his brother Teerapat Ungsriwong, it all started simply with the passion in alcoholic beverages — wine, whisky and beer — until they came across imported beers like the popular Belgian wheat beer Hoegaarden many years ago. From then on, they started to seek out for a wider variety of imported beers ever since.

“There’s never one right definition for ‘craft beer’,” said Nattachai. “For me personally, it must be something that you create with love and care, and the commercial aspect of it is hardly part of the consideration.”

Both Thai Beverage and Boon Rawd Brewery, Thailand’s two biggest beer manufacturers, use imported hops. Nattachai believes that it is because the brands Chang and Singha produce lager beer, and the flavouring from hops in the recipe is not so much of an emphasis that they would invest in local farming.

Among basic ingredients like water, a starch source like malted barley and yeast for fermentation, hops work in beer brewing both as a preservative and flavouring agent. And this is where craft beer differs from mainstream lager beer. With craft beer, Nattachai said that a variety of hops is used, sometimes mixed together, in creating more distinctive characters.

“At first I just liked growing vegetables myself,” said Nattachai. “But then later I got to know more about beer and finally learned how to brew it. I heard that there have been attempts to grow hops in Thailand before. There’s also an idea that the plant cannot grow in this type of weather but I went ahead anyway and ordered hops rhizomes from the US just to experiment. It turned out that they have grown fine, and things got more serious from there.”

Among the 26 species of hops growing at Deva Farm & Cafe are Columbus, which is citrusy and slightly woody, Chinook, which is slightly spicy and very piny, and Centennial, which gives out a strong citrus aroma. Nattachai compared the plant to grapes in that it’s also a climbing plant that lasts as long as 10 years. 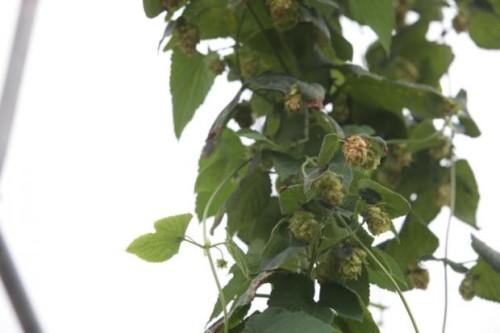 After four or five days of the rhizomes being buried in soil, sprouts will start to shoot out. After three to four months, the plant’s bines will grow up the strings or wires to the overhead trellis as high as 6-10m. In Europe or America, after the harvest of the flowers, the plants will be cut almost to the bottom as winter approaches. Because of Thailand’s warm weather, Nattachai said that the crop can enjoy a second growth cycle and consequently double its production.

The chance of small-scale beer brewing being legalised is slim, so Nattachai said he’s planning to export his produce to brewing factories in neighbouring countries like Vietnam, Cambodia and Laos.

“In terms of the quality, I think we can surely compete with hops producers from abroad,” said Nattachai. “First of all, it’s just like any other plant, different locations produce different tastes and characters.”

Nattachai said that it would take at least three years for the crop to reach its full potential in terms of taste. He speculated that the farm could produce as much as 1,400kg of hops per year.

Another way of making a business with his produce is a plan to open a brewpub right next to his farm soon. To be named Mitr-Sampan, the pub is co-founded with Wichit Saiklao, an army colonel, of Chitbeer, a bar on Koh Kret, considered to be the hub of Thai craft beers. 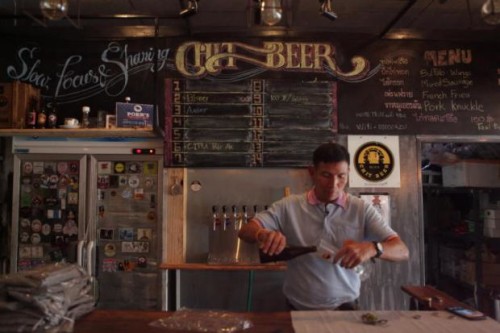 Since 2014, Col Wichit has been hosting a weekly class on beer brewing at the bar (Nattachai being one of his students) and has so far taught some 500 people, resulting in around 50 craft beer brands.Every weekend, craft beer lovers join at Chitbeer to taste new beers created by local producers. Strictly speaking, this is not entirely within the law, but Col Wichit believes in the academic purpose of his class — he wants to educate people and create a community of beer brewers, preparing for the day when prohibition is lifted.

“Craft beer has become such a hit in the past few years because like any other things in life nowadays, we want something that fits our individuality — what we eat, the car that we drive, the place that we go,” said Col Wichit. “And beer is part of that trend. With beers in Thailand, I think of the limited choice not as a problem but as a great opportunity.”

The plan for brewpub Mitr-Sampan is a testimony to this commitment, Col Wichit said. Eventually, the movement will move to the legal stage where Thai brewers will be invited to join in and showcase their talents.

Surprisingly, Col Wichit doesn’t think that beer brewing should be legalised right away as in other countries. He said that craft beer is an art, and “the content” by Thai brewers is to be perfected further.

“Just use common sense, our country has great diversity of resources, and our beers will have unique characteristics for sure — maybe we can use mineral water from Ranong province, perhaps the fruits from the South, and so on. The future of Thai craft beer will definitely be great.”