Amid a largely tepid Singapore bourse, Thai Beverage has stood out with its frothy rise this year, attracting investors with its dominance in Thailand’s alcohol market and strong earnings growth.

And while the counter has cooled slightly recently owing to some profit-taking, market watchers still see ThaiBev as a good buy for the long term, as the company continues to achieve a deeper market share and wider regional presence.

Since the start of the year, ThaiBev has gained 48.2 per cent to 99 cents at the last close, easily the best performer of the 30 Straits Times Index component stocks. The next best was Sats, up 28.5 per cent. Overall, the STI has declined 0.87 per cent so far this year.

ThaiBev’s surge – part of a gradual build-up since 2012 and far above the initial public offering price of 28 cents – has defied January’s stock market volatility and the Brexit-triggered panic in June.

The company – controlled by Thai billionaire Charoen Sirivadhanabhakdi as chairman and his son Thapana as chief executive – is now the fifth largest on the STI, with a market value of $24.86 billion, behind Singtel, DBS Group Holdings, OCBC and United Overseas Bank. 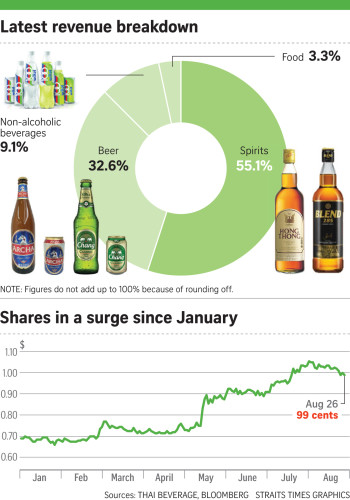 Part of this growth is down to the strong momentum in its alcoholic beverage business, as shown in the second quarter and half-year results reported earlier this month.

While total net profit slid 1 per cent year-on-year in the three months to June 30 owing to lower contribution from associates, including drink company Fraser and Neave (F&N) and property group Frasers Centrepoint, ThaiBev’s core net profit jumped 19.1 per cent to 5.42 billion baht (about S$212 million) in the second quarter, or a better 24.5 per cent to 13.11 billion baht in the first half of the year.

DBS analyst Andy Sim projected ThaiBev’s core profit growth – excluding the disposal gain by F&N last year when it sold its stake in Myanmar Brewery – to be about 24 per cent for the full year, with momentum supported by broad growth.

“The spirits segment, which is their main business, is stable and generating healthy cashflow. The beer business has increased its market share in Thailand to about 40 per cent, and that has remained stable even after they raised the selling price in May,” Mr Sim told The Straits Times.

The rebranding campaign it launched late last year was successful in giving Chang a more contemporary packaging and appeal to young consumers, Mr Sim noted. There was a 70.4 per cent surge in beer revenue for the first half of this year, while spirits revenue grew 3.3 per cent.

“Performance in the non-alcoholic department is also improving, with losses coming down. Its main priority here is to break even in 2018,” he added. Non-alcohol product revenue, from the likes of F&N’s sports drink 100Plus and green tea range Oishi, rose 8 per cent in the first half and net loss narrowed by 31.1 per cent.

ThaiBev rolled out its Oishi products in Singapore in March last year, after bringing 100Plus into Thailand in February.

The push for wider reach and greater diversification is a work in progress, but, for the moment, the strong sales is making ThaiBev a very cash-rich company – with operating net cash up 62.4 per cent to 13.85 billion baht in the first half – and a very solid pick for investors, who can also expect an indicated dividend yield of 2.58 per cent.

KGI Fraser Securities trading strategist Nicholas Teo was also among those impressed. “It’s just a very good story all around. Aside from its successful plans to re-engineer the business and products for growth, ThaiBev is also one of the few counters in the defensive consumer segment, supported by its strong position in Thailand.”

Inevitably, there will be profit- taking, with ThaiBev shares down 5.4 per cent since the start of this month.

But Mr Teo said: “The price may have run a little ahead, but with a price to earnings ratio of around 22, it’s by no means overvalued if you look at other defensive counters – healthcare, for instance – that are trading at 30, even 40 times.”

Mr Sim said: “Our 12-month target is $1.13, which means a 10 per cent or so potential upside as the company continues to execute its strategies and deliver growth.”