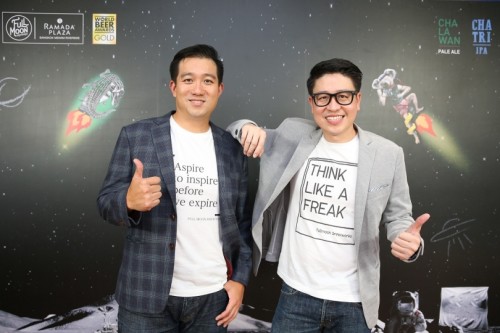 It’s mission accomplished for Thai craft-beer pioneer Full Moon Brewworks, which after years of hard work snatched the gold medal at the recent World Beer Awards in London. Now it’s ready to take on the world with its new brew, Chatri IPA.

Sukij Thipatima has certainly come a long way from being widely dismissed for a crazy idea to make his own “craft beer”. That was seven years ago and no one had even heard the term. Draft beer was still dominating the Thai market.

Sukij embarked on a mission he called “man on the moon” to perfect his home brews and offer local sons of the suds something different. He quit his day job, took a course in Germany at the brewing institute VLB-Berlin and came back in a hops-redolent froth.

It took three excruciating years to get the right permits, but Sukij and his pal Kamalas Pattanapaisarn persevered in their laboratory, experimenting with both local and imported ingredients. Because Bangkok was still oblivious to the concept of craft beer, they moved their base of operations to Phuket, where the expatriates and foreign tourists immediately embraced his quality suds with Thai flair.

The beer brewed on site at Full Moon Brewworks includes the signature light and delicate Phuket Lager, which has the aroma of Thai gaba rice, and the British-style Andaman Dark Ale with the pleasant caramel fragrance of Thai black sticky rice.

The brewery also makes several other seasonal varieties, such as Inthanon Fruit Ale, with a citrus character from Galaxy hops; Bohemian Lager, with pure German malt; and Pandanus Green Ale, specially crafted to celebrate the St Patrick’s Day but with local flavour.

Normally you’d have to be in Phuket to try all these, since they’re only available on tap, although Chalawan Pale Ale and Chatri IPA also come in bottles.

Just like the ruthless yet charming Chalawan, the crocodile king of Thai folklore, the pale ale named for him balances bitterness and sweetness. Crafted from Pilsner malt and roasted Munich malt, it has a medium body with moderate carbonation. It delivers a caramel note flanked by lychee, citrus and floral aromas that glide into a long finish, thanks to the robust profile of Cascade and Columbus hops.

In August Chalawan Pale Ale won the gold medal at the prestige World Beer Awards in London, becoming the first craft beer from Thailand to win.

Chatri (Thai for “honourable men who know how to fight) is a blend of malt, rye and three types of Australian hops with intense aroma and texture. The pleasantly grassy, hoppy brew is balanced with the sweet malt, rendering refreshing and light citrus and grapefruit nose.

“The microbrewery business in Thailand isn’t easy,” says Sukiij. “There’s a series of challenges involved, and Full Moon almost had to close three years ago. We knew the risks from the beginning. We knew it wouldn’t be easy and that the chance of failure was high. But we had to keep going, keep the quality up and to be creative.

“Our philosophy has stayed the same – to merge and combine different techniques and different styles of beers to create new experiences. Our idea of the ‘power of contradiction’ is to push the boundaries and expand the horizons.”

Suds you can savour

The Full Moon Brewworks Microbrewery & Restaurant is at Junceylon in Phuket.