The beer business is booming in Vietnam, and the country’s two largest domestic brewers are soon to be up for sale, including to international investors.

The central government recently signaled it would float Sabeco and Habeco, Vietnam’s two market share-leading breweries, as part of a push to divest public ownership of a number of leading State Owned Enterprises (SOE). The two breweries are among the few profitable SOEs, and would make an attractive target or foreign investors. 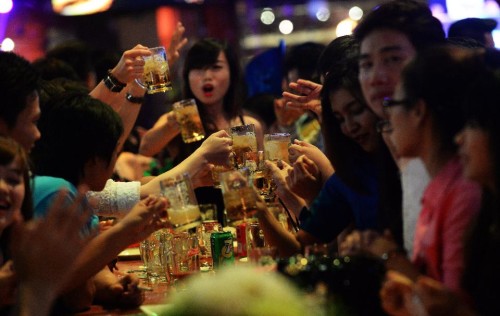 At present the Vietnamese government owns 89% of Sabeco and 82% of Habeco. The two companies have been ordered to first go public on the local stock exchange before the government will begin divesting shares. This is apparently in order to prevent the local market from overheating.

There are several international and regional brewing giants who it has been speculated are potential buyers of the state-owned companies. Thai Beverage PLC has openly expressed a bid for Sabeco that may be worth as much a $2 billion, while Asahi, SABMiller and Heineken are also rumored to be interested.

Heineken is already a major player in Vietnam with a 60% stake in Vietnam Brewery Limited, another leading beverage producer. Carlsberg meanwhile already has a 10% stake in Habeco worth an estimate $400 million.

There is an interesting correlation between the growing middle class in Vietnam and the consumption of beer. Over the past five years, consumption has doubled to more than three billion liters per year. The Vietnam Beer and Alcohol Beverage association predicts this will increase by another 25% to four billion liters annually by 2020. This tracks with a similar rise in median incomes in the country.

On the ground, the competition for Vietnamese beer drinkers continues apace. Beer companies are dishing out everything from marketing collateral; such as signage, coasters and branded umbrellas; to significant cash bonuses to venues that give them exclusive distribution deals or prime space in their fridges.

Heineken and Japanese brewer Sapporo in particular are involved in an arm wrestle for dominance in the local market, while Singapore’s Tiger Beer is also in the race. Given monthly sales quotas are met, some bar owners can see anything from $13,000 to $25,000 in annual bonuses from the beer companies. This is big money in a country like Vietnam.

There is also possibly a public health downside to this increased beer consumption in the country, with rates of stomach cancer, often linked to heavy alcohol consumption, on the rise. Recent health ministry statistics show it is the second most common form of cancer among men and third among women in Vietnam. More alarmingly, it is increasingly afflicting those younger in age.