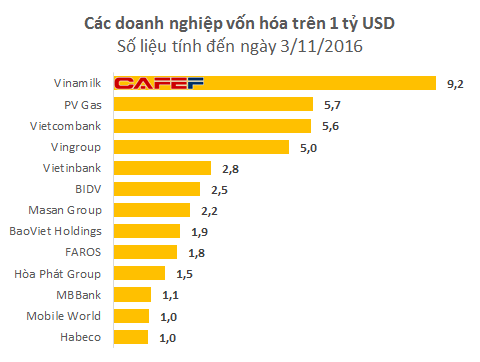 The name which has been added on the list of businesses with capitalization value of over $1 billion is Habeco, a brewer. Habeco shares saw prices hitting the ceiling price levels in the first five trading sessions of the last weeks and had a closing price of VND95,300 per share on November 3, with the company’s value of over VND22 trillion.

In the week from October 31 to November 4, while more than 50 percent of shares saw prices decreasing, Habeco’s price still increased sharply by 180 percent from VND39,000 per share to VND109,500, according to ndh.vn.

Analysts believe that its capitalization value would continue increasing in the time to come as investors put high hopes on the state’s plan to divest Habeco shares.

The addition of Habeco on the list of businesses with capitalization value of over $1 billion has raised the number of businesses to 13, a record high in the last 16 years.

The list may become longer as key enterprises in the national economy, including Sabeco (brewer), the Airports Corporation of Vietnam (ACV) and the nation’s flag air carrier, will list shares on the bourse as per the government’s request.

The majority of businesses on the list are those in which the state holds the controlling stake. However, the number of privately-run enterprises is on the rise. These include well-known names such as Vingroup, Masan Group, Hoa Phat, The Gioi Di Dong and Faros.

Of these, Vingroup, which invests money in many different business fields, including real estate, retail and agriculture production, belongs to Pham Nhat Vuong, the first Vietnamese dollar billionaire recognized by Forbes.

Novaland, a well-known name in the real estate sector, is believed to join the group of $1 billion businesses in the time to come.

The number of Vietnamese businesses which have turnover, assets and stockholder equity of over $1 billion is also on the rise. However, only three large corporations can have profit of over $1 billion. They are PetroVietnam (oil & gas), Viettel and Samsung Electronics Vietnam.

According to CafeF, about 50 enterprises in Vietnam have turnover of over $1 billion, including state-owned, privately-run and foreign invested.