The concept of an energy self-sufficient brewery was awarded with the Handelsblatt Energy Award in Berlin. In the category ‘Industry’, the Karmeliten Brauerei convinced the Energy Academy with the modular energy concept as a showcase for the energy turnaround. On the evening of September 28, 2017, the awards ceremony took place at the Museum of Communication in Berlin. 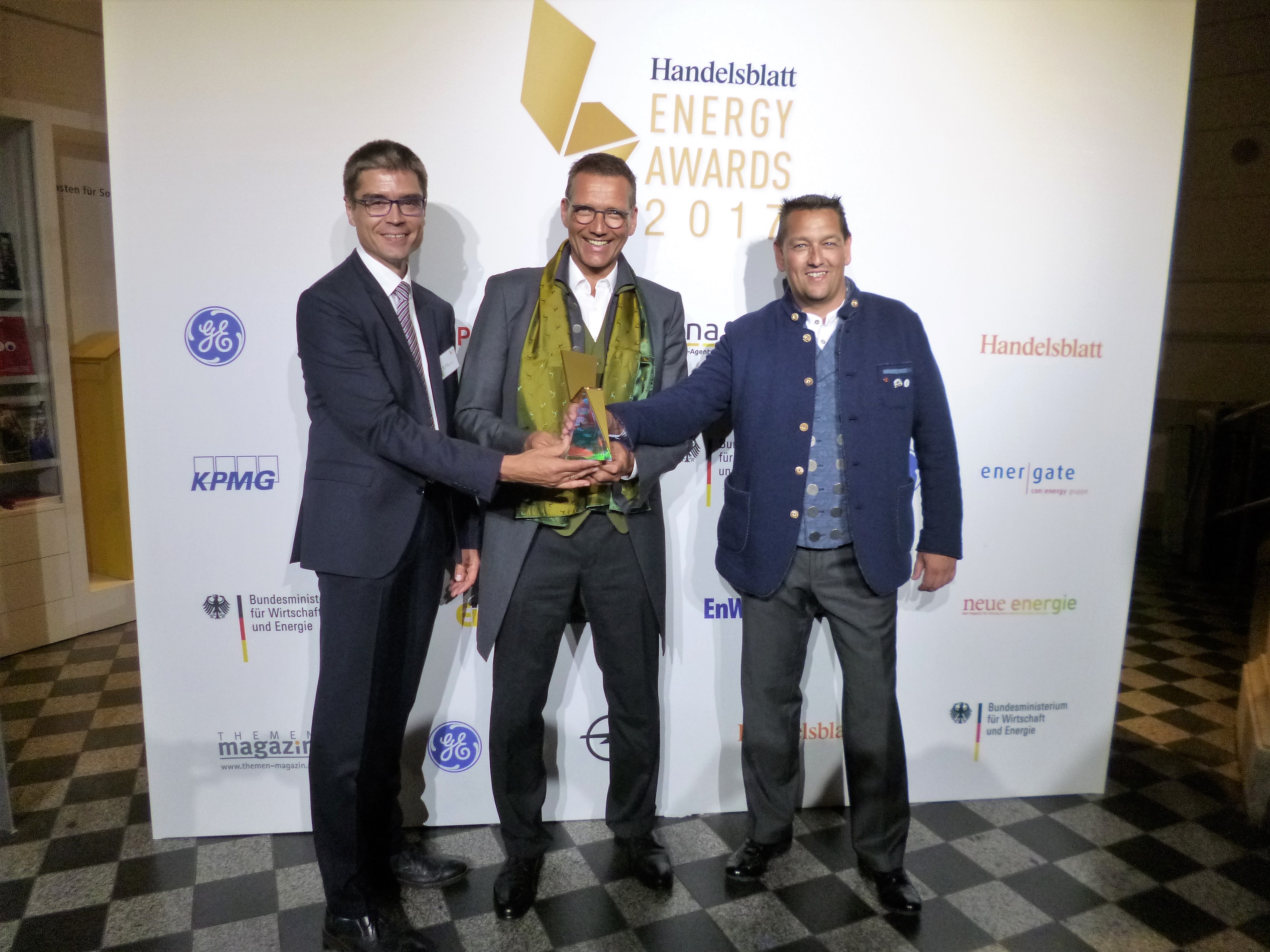 Berlin, Straubing, Ludwigsburg, 04.10.2017 – A cooperation consisting of the partners ZIEMANN HOLVRIEKA GmbH, the University Weihenstephan-Triesdorf and the Karmeliten Brauerei, as the visible partner for the Energy Academy, is currently revolutionizing the use of energy in the food and beverage industry. “With the concept of the energy self-sufficient brewery, we have committed ourselves to a sustainable beer production with the greatest possibly savings in energy. We are delighted to receive this extraordinary award”, said Christoph Kämpf, Managing Director of the Karmeliten Brauerei after the ceremony. Together with the brewmaster Thomas Eichenseher and Klaus Gehrig, Managing Director of ZIEMANN HOLVRIEKA GmbH, he accepted the glass trophy at the gala event in Berlin.

Since 2013, the initiators of the Energy Awards – the Handelsblatt and GE – have been awarding innovative, future-oriented and promising projects once a year, which use energy optimally and thus increase their efficiency and save energy. The winners are selected by the Energy Academy, a renowned jury. The Energy Academy sees itself as a “think tank” of the energy industry and unites experts, scientists, entrepreneurs and politicians around the topic of energy. In the five categories of industry, mobility, smart infrastructure, start-ups and municipal utilities, the companies are awarded as pioneers of their respective industries, who contribute to shape and advance the development of the energy turnaround. In the category “Industry”, the Karmeliten Brauerei was able to convince the jury with the concept of the energy self-sufficient brewery with an optimal use of raw materials.

In 2013, the Karmeliten Brauerei, which celebrates its 650th anniversary this year as the oldest company in Straubing, was already awarded the ‘Federal Prize for outstanding innovative craft achievement’, together with its partner ZIEMANN HOVLRIEKA GmbH. Another milestone is the ‘Best Practice Label’, awarded by the German Energy Agency ‘dena’, for the energy-efficient cascade brewhouse, developed and implemented by ZIEMANN HOLVRIEKA GmbH. In 2017, the nomination for the German Environment Prize followed.

For several years, the brewery plant manufacturer ZIEMANN HOLVRIEKA GmbH, the University of Weihenstephan-Triesdorf and the Karmeliten Brauerei have been dealing with the sustainable and environmentally design of the production facility in Straubing and its processes.

The objectives of the innovative concept are as follows:
• Reduction of the use of primary energy
• Own generation of electricity
• Use of natural energy sources (solar thermal energy, Fresnel lenses)
• Energy recovery from wastewater
• Transformation of heat into cold
• Use of natural cold
• Reduction of peak loads (storage technology)
• Recording, evaluation, analysis of energy consumption for an energetic production order planning

Or, in simple terms: almost all energies generated on the grounds of the Karmeliten Brauerei in Straubing shall be used several times in order to be as independent as possible of the energy market.