The competition on consumer’s markets, especially in the brewing branch stimulates the search for new technological decisions as well as appearing of original novelties. Successful ideas rapidly attract attention so one cannot forget of legal protection of intellectual property (IP), that is formula, process, brand name and label design. In case of lack of legal protection on behalf of the state, the rights of new development owner can be violated which can lead not only to image but also income loss. 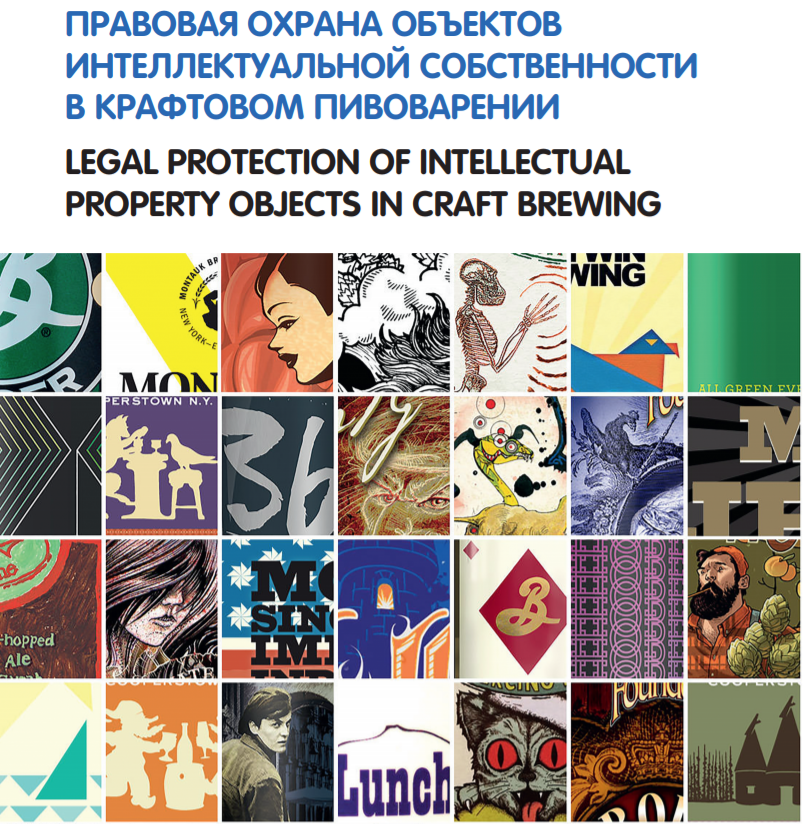 The legal protection of IP has been formalized in the Constitution of the Russian Federation (article 44). The general content of intellectual property notion is defined in article 138 of the Civil Code of Russian Federation that stipulates the exclusive rights for results of intellectual activity (commercial name, trade mark, service mark and so on) of a citizen or juridical body.

Institutes of natural and technical sciences were traditionally the most active in protecting intellectual rights. Yet, over the recent years, business representatives have been expressing a growing interest to this issue.

In this article we are going to tackle problems of right protection of intellectual property in the sphere of craft brewing.

In Russia craft brewing emerged in 2012 and Saint Petersburg is historically considered to be the capital of original brewing, as more than 60 private breweries work here. Among them there are well known AF Brew, Bakunin, Vaileostrovskaya Pivovarnia, Drakkar. Craft breweries that have a product range of more than 100 sorts are Salden’s Brewery (Tula city), Jaws Brewery (Sverdlovsk region) and Victory Art Brew (Moscow). Many of these companies having traditional sorts as for instance IPA (Indian Pale Ale) and APA (American Pale Ale), are constantly developing new unique beer formulas. In this connection one can notice a trend of collaborating for brewing a beer sort, where Russian breweries are cooperating either on the national or international levels.

Being produced at a small brewery under a brewer’s unique formulas craft beer has a special aroma and flavor. Thus, American, West European and Russian craft breweries are often experimenting with bases and additives and quite unusual combinations when producing original sorts. By doing so they support interest and form their own target audience thus winning a share of the market.

Craft brewing led to important cultural and social phenomena, that are expressed in blurring stereotypes that best beer can be made only at a certain place as well as forming a virtually new youth subculture appearing around popular craft bars.

It is important to note the attention craft brewers pay to label designing. To a large extent, artistic solutions creating a virtually unique pictures and graphics form an additional factor making craft beer a special product thus increasing its value among consumers and provoking unfair competitors to take illegal acts.

By unfair competition we understand any act by economic entities (group of people) that are targeted at getting benefits during entrepreneurial work and contradict the law of Russian Federation, traditions of business practice, ethical code as well as reasonability and fairness, and led to or can lead to losses to other competing economic agents or injured or can injure their business reputation (Art. 4 Federal law of 26.07.2006 # 135- FL “On competition protection”).

According to Paris convention on industrial property security, actions incompatible with the norms of fair competition include:

In this connection it would be useful to know the bases of the business legal safety, in particular, in craft brewing.

Let us note that not only a logo of a craft brewery but also the name of a certain beer can be registered a TM. This is especially actual in cases when consumers start to link the name of a new drink to a successful experiment concerning some beer sorts. For example, Nuclear Laundry (Atomnaya Prachechnaya) by Jaws Brewery has been historically associated with good IPA. In this case an assumed brewery-competitor for beer in IPA style can use or interpret such name for marketing purposes keeping its meaning including translation of it into other languages. By doing so, competitive brewery will try to attract the consumer who may have heard name Atomnaya Prachechnaya or any other slang variant of the name but could be unaware of the original drink by Jaws Brewery. However, if the brewer registers the name as a verbal mark used as a trade mark, he/she can prohibit a competitor using such name as similar to the extent of confounding and thus secure his/her market share and protect her/his reputation.

In order for the development in this case, technological solution (for example, a production technology or a drink formula) to get legal protection, as an invention, it must be new and industrially acceptable and have an inventive level. In case of formula patenting, it is important to correctly define the technical result. For example, it will be incorrect to designate the technical result as “improvement of taste qualities” because such characteristics is subjective. It will be correct to designate the technical result as a longer shelf life of a product or wider range of drinks. Getting a patent for a new formula or brewing technology allows to monetize the creative impact of inventors into  developing new sorts of craft beer. And sharing information in patents on new developments promotes creativity of future inventors.

At the same time, one has to remember that patent rights are granted in case of giving information on the development essence enough to put it to life at the moment of patent documents publication in official bulletins or databases. As starting from that moment, the information on the development gets accessible to unlimited number of people, the competition increases accordingly, and the patent owner finds it difficult to monitor and prove in case his/her developments are used by other people.

Thus, for legal protection of a craft business from unfair competition, it is necessary not only to individualize goods and services by TM and SM, but also protect new formulas and technologies that will in the future secure against:

Erfis patent company (Russia, St. Petersburg) has been working in the field of intellectual property protection in Russia and abroad since 2016.