Today we know of 24 breweries in Germany at monasteries. Some of them kept succession from ancient monasteries, some were founded at new places. Several breweries came into private possession, but kept the name and attributes of monasteries in beer production (as the mentioned Weihenstephaner) and they too can be considered relatively monastic.

A half of the operating abbey breweries are located in Bavaria, where they draw the attention of tourists as cultural objects. Guests of the monastery have the opportunity to combine the pleasant –a glass of beer drunk in the brewery or at a small restaurant nearby, with the useful – acquaintance with the German history. 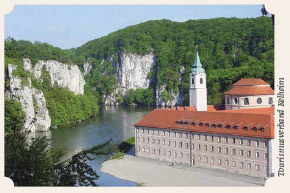 The castle of Klosterbrauerei Weltenburg brewery is located at a picturesque bend of Danube in Southeast Bavaria. It is one of the oldest surviving Christian monasteries in Germany. It was founded by Scottish monks in 620 AD, and in the following century the monastery adopted the Benedictine Rule. According to historical data, beer production began here only in 1050, that is, 10 years later than in the monastery of Weihenstephan. After the secularization of 1803 the monastery was returned into church property by king Ludwig I in 1842.

The brewery’s annual output volume is about 0.3 million dal. Moreover, Weltenburger beer is bottled in the monastery itself. Tourists have the opportunity to taste it during the excursion to the brewery or in a beer garden. Despite rather small output volumes, the range of this brewery includes about 10 classical and seasonal sorts of German beer. 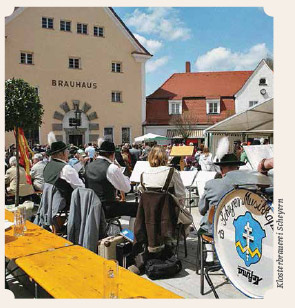 In 1119 one of the Benedictine monasteries settled down in the Bavarian castle of Scheyern, which inherited the name of its count founder. At the same time a brewery known as Klosterbrauerei Scheyern started working at the monastery. After nationalization in 1803 both the castle and the brewery were rather soon (in 1838) returned to the Benedictines. The brewery was leased for a long period of time, but after the second return to the monks and a reconstruction, in 2006 it continued working. The monastery doesn’t set ambitious tasks of geographical expansion yet, but waits for tourists, selling beer in its own tavern, local restaurants and at the local market. 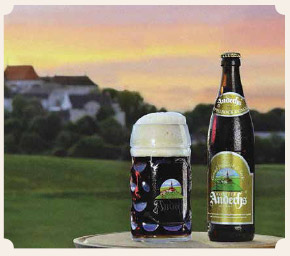 The Klosterbrauerei Andechs brewery won world popularity not only as tourist object with a beer garden, but also thanks to export orientation and rather large volumes of beer production – more than 1 million dal per year. In supermarkets of different countries you can find light beer Andechser Bergbock Hell and dark beer Andechser Doppelbock Dunkel. Two large distributors make retail delivery of this beer to the USA.

The history of brewery began in 1391 when Benedictines founded the monastery in a beauty spot on the mountain between the lakes Starnberger and Ammersee in the Upper Bavaria. We can see this mountain and the monastery on the label of Andechs brand. 43 years after secularization, in 1846, the monastery was redeemed by King Ludwig I and returned to Benedictines with the name of St. Boniface. Start date of beer production is documentarily determined to be 1450, but, of course, today’s brewery which started working in 1970 with involvement of hired workers has an absolutely different scale of production. 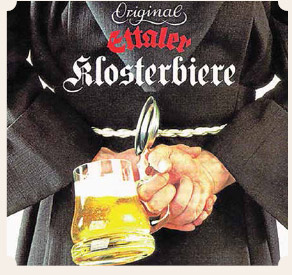 Klosterbrauerei Ettal is one of the few breweries in which beer is made by monks. The Benedictine monastery of Ettal (or Ettal Abbey) is located in the village of the same name in the mountain part of Bavaria. The monastery was founded in 1330, on the day of Saint Vitalis, by the emperor Ludwig of Bavaria on his way back from Italy. The abbey was completely reconstructed after the fire in the first half of the XVIII century in style of international baroque that made it a very attractive tourist object.

Secularization interrupted the usual life of the monastery for almost 100 years, but thanks to the initiative of baron von Cramer-Klett in 1900 monks from the abbey of Scheyern already familiar to us occupied the monastery. It isn’t surprising that soon in the territory of their monastery a new brewery and other productions which became a basis of the economic independence important for Benedictine monks started working. Ettaler beer can be tasted not only in the monastery, but also far outside its walls, including some EU countries.

A small restaurant type brewery in Saxony-Anhalt works at the Cistercian convent of St. Marien zu Helfta since 2005. From the moment of transition of the castle to private property in the middle of the XVI century, only in 1999 after the carried-out restoration the sisters settled there once again.

A special category of abbey beer appeared because some monasteries, without having their own capacities for beer production, sign contracts with beer producers allowing them to use their names.

For example, Riedenburger brewery which is known for its use of organic technologies and production of ecobeer develops regional cooperation with the monastery Kloster Plankstetten. Its brand line consists of four Plankstettener beer sorts, “brewed in the tradition of the former Benedictine brewery Plankstetten”.

One more example – Klosterbrauerei St. Marienstern brewery at the Cistercian monastery in a small Saxon city of Oberlausitz. It had worked from 1700, endured all crises, shortage of raw materials, but couldn’t stand up to the second wave of expropriation in East Germany and was closed in 1973. Then the monastery was returned to the Cistercians who converted its premises into a shelter for disabled people. But historical memory of this brewery remained and in 1993 the output of unpasteurized beer “brewed according to traditional recipes” on behalf of Klosterbrauerei St. Marienstern was renewed by a private enterprise Stadtbrauerei Wittichenau.

The rich history of a beer brand always attracts people, but hardly most of the consumers will have the desire to delve into property rights. Therefore there is a big category of “monastic breweries” which belong to independent business firms. 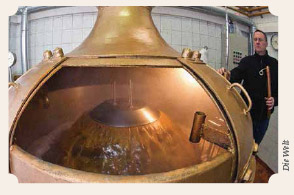 The common story is when after secularization the brewery passed into private hands and continued to work or owners used the premises of the former monastery for a new brewery. We already mentioned one of such striking examples of use of a historical image – it is, of course, the Weihenstephan brewery.

Founded by the Cistercians in 1268, the monastery in the town of Neuzelle is situated in the East of Germany, in the territory of the State of Brandenburg. The first beer in the monastery was brewed in 1416, and in 1589 with the permission of emperor Rudolf II the monastic brewery started working. During its history it survived: secularization in 1817, fire in 1892, expropriation in 1946 (formation of GDR) and privatization in 1992 as a result of which the company Klosterbrauerei Neuzelle GmbH was formed.

Being a local architectural sight in baroque style, today the monastery and brewery also attract tourists and fans of beer, producing about 0.4 million dal per year. Among a number of original brands from Klosterbrauerei Neuzelle, with various target audience and not always connected with monastic subject, dark beer “Dark Monk” (Schwarzer Abt) is the most famous. 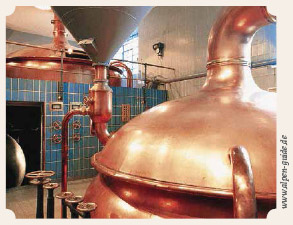 The monastery Alpirsbach was founded by the Benedictines in 1905 at a massif of the State of Baden-Wurttemberg in the southwest of Germany. It draws attention of lovers of medieval culture with its location, Gothic architecture, church pipe organ, and also a challenging fate. The monastery had to endure country revolts; it belonged to various Catholic orders, was disbanded and again became populated by monks. Throughout the XVI-XIX centuries the monastery was in property of Protestant Church though today it is shared with Catholic Church.

In 1877 in the territory of the former monastery the Glauner family founded brewery which at the beginning of the XX century received the name Alpirsbacher Klosterbrau. Today already the fourth generation of Glauners operates quite a large industrial enterprise which produces about 1.8 million dal of beer per year, and the line of brands includes a score of beer sorts with a good-natured monk on the label. Former monastery Zwiefalten, located on the south of Germany, in Baden-Wurttemberg, on the foothills of Swabian Jura, had an equally difficult fate. It was founded in 1089 and soon became the cultural and religious center of the region. But the Reformation and Peasants’ war led to particularly big devastations in the south-west of Germany. The monastery certainly suffered too; it was pillaged in 1525 and later opposed the protestant church in its region. In 1724, under the supervision of abbot Beda, the monastery started a brewery construction.

Secularization put an end to the church life of the monastery which was sold one of the first, in 1802. Some time later in the premises a psychiatric clinic was opened, on the basis of which a scientific center was organized. Nevertheless, the brewery story did not finished with the monks’ leave. In 1897, it became the Baaders family property. They founded company Zwiefalter Klosterbrau and manage it by today. At the present time, it includes a rather big brewery with modern equipment producing more than 10 beer sorts and a restaurant for tourists. 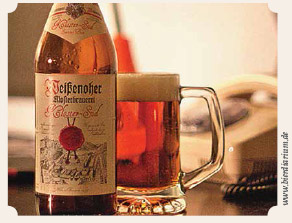 A range of breweries in Germany belonged to mendicant orders, we will look at them separately.

Next: The Trappist beer ->