Everyone at some point in their life has a turning point on how they perceive politics, business, the economy, and beer. When you are young and funds are tight, cheap beer is generally the pick-me up of choice with a huge return on investment – drop a few dollars on a Millers or a Budweiser and within a few hours you end up feeling like a million dollars (the next day maybe not so much).

However as time passes we get married, have a family and raise children, and become infinitely more aware on generating better quality returns on any investment we make; so we might end up drinking a beer with more depth to the pallet like a Samuel Adams Boston Ale, or with more heart and soul like a Yuengling Porters. The initial investment may be slightly more expensive, but the returns more immediate, and of infinitely better quality.

This article will examine why the Boston Beer Company (SAM) is a better beer stock versus bigger brands like Molson Coors (TAP) andAnheuser-Busch (BUD), and will address the importance of brewing a better return on investment in your beer stocks.

Any British or Australian’s first foray into American Beer is usually begins with consumption of one of the iconic brands like Millers or Budweiser; but the affair abruptly ends by the end of the first glass. The experience would be akin to introducing a touring American or Canadian in Australia to a Fosters, if you could find a bar that serves Fosters in Australia that is. A quality everyday beer would be a Carlton Draught (SBMRY.PK), or perhaps a Coopers Sparkling Ale. Which is why many Australians have a preference for quality beers like Samuel Adams and Yuengling, and thankfully I was fortunate enough to have some American friends who introduced me to the range of American boutique beers such as these.

Investing in beer stocks can sometimes be one of those ‘seemed like a good idea at the time’ such as an all-nighter in Vegas or a road trip across the country, however the experience can often lead to a more sober assessment of the experience in the cold light of dawn on the following day. Key to any investment is strong performance in quantitative fundamentals, but there are also key qualitative factors to take into consideration instead, take this Carlton Draught advertisement as a case in point. Beer markets are extremely competitive and brand penetration, marketing and customer loyalty are what underpins the good fortunes of a brewing company.

Beer markets are increasingly competitive but don’t be fooled by the amount of brands out there representing market diversity. Belgian basedAnheuser-Busch controls 47.7% of the US market, which may soon climb to over 50% pending its acqusition of Crown Imports, the Corona Brand which accounts for a large number of sales in the US. Anheuser-Busch controls over 200 beer brands and 25% of global beer markets. While this may appear attractive for holders of the stock from a business sense globally, in terms of the domestic US market such a dominate market share promotes concerns of establishing a beer monopoly which leads to higher prices for consumers.

The US beer market is essentially a duopoly though, with Molson-Coors accounting for a significant amount of remaining market share and diverse branding. Yuengling, America’s oldest brewery slides in at around 1% market share largely driven by its sales of Yuengling Lager (80% of its own brand penetration), and the Boston Beer company is included in the ‘remainder’ section of the market. A comparison of beer market share by brand from 2009 – 2011 is shown below: 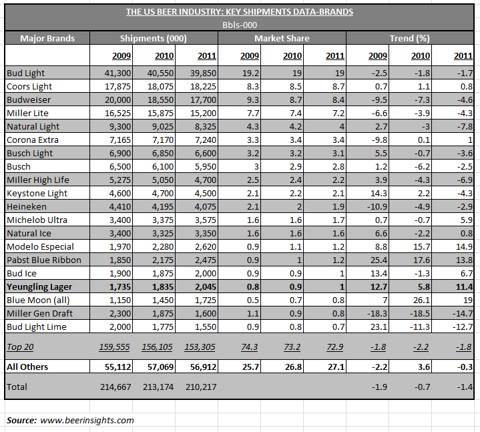 What is important to note above is the reducing popularity of big brands and the increasing (albeit small overall) favor for smaller brands such as Yuengling and Boston Beer.

The key performance metrics below for Molson Coors, Anheuser-Busch and Boston Beer at the time of writing are detailed below: 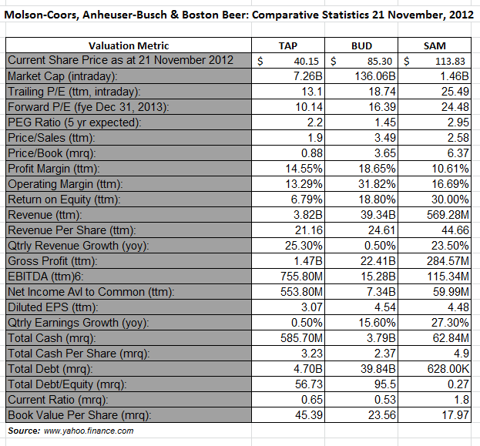 While Boston beer has the highest share price and price to book ratio, I believe this is justified given that it has a marginally higher price/earnings growth ratio, it delivers a substantially higher return on equity (at 30%), and it is generating almost 5x and 2x revenue per share at $44.66. The company is significantly smaller so has greater potential for growth and it is not over leveraged, compared with debt to equity ratios of 56.73 and 95.5 .

But qualitative factors I suggest are often as equally important. I recently travel to Boston, MA where I went with a friend to watch the New England Patriots defeat the New York Jets. 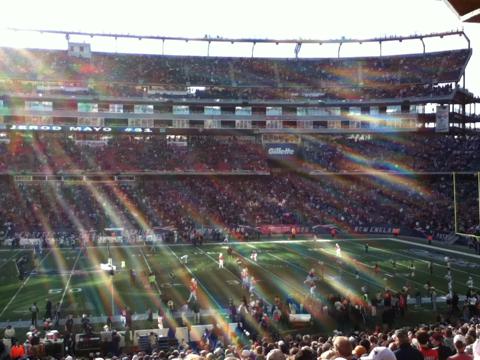 It was a fantastic game and a unique snapshot of American culture. What struck me though was that while I was standing in lines 15 deep for 10 minutes to purchase a couple of Samuel Adams Oktoberfest beers for my friend and I, was that the adjacent beer stands for Budweiser and Millers were one deep, and not really representative of continuous demand. Even the opportunity cost of paying more for a Samuel Adams was not enough to shift consumers three feet to the left and reduce customer wait time by 9 minutes. It was an example to me of where quality (and customer loyalty) trumps mass produced quantity. The growth of microbreweries offering quality beers represents a notable change in consumer preference, and is a potential longer term threat to larger breweries like Molson-Coors and Anheuser-Busch.

For the reasons I have outlined above, if you must have beer stocks in your portfolio, I would look to a smaller brewer like the Boston beer Company which has significant potential for future growth, is generating increasing market share, and is delivering a very good return on equity of 30% at present. The other alternative is to not include any beer stocks in your investment portfolio; divert those funds to other companies offering better potential for capital growth and dividend income (Boston Beer pays no dividend at present), and limit your beer investments to an individual position in Yuengling.

Yuengling is America’s oldest brewery established in 1829 and which is gaining market share in the uptake of their product and their distribution across mainland America (as evident in the earlier table). The company has a long and rich history which can be read here. The original brewery still stands and is still operating, and I was fortunate enough to recently undertake one of their free factory tours at the Yuengling Brewery in Pottsville, PA. 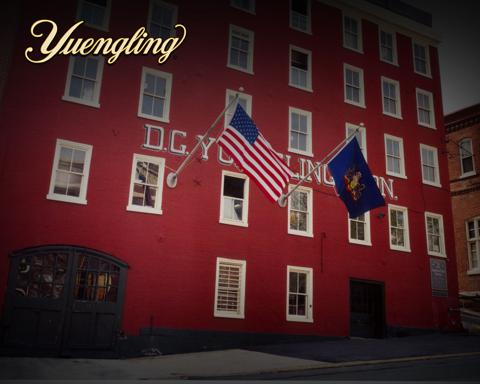 If we admit that some of the best beers are not produced by the big brewers like Molson-Coors and Anheuser-Busch, we should also realize that some of the best companies are private entities and not listed corporations. Coopers in Australia is a good example of a large well run private beer brand company with domestic and global distribution (if you are ever in New York City drop into The Australian Bar where you will be able to sample a drop or two). Yuengling is also a private company; the current owner is the fifth generation brewer in the family, buying his stake in the company in 1985.

The company continues to expand and modernize its operations, driven by its vision to strengthen its position as one of America’s fastest growing breweries. From 1997 – 2001 the company has doubled its volume output and surpassed the one million barrel mark; it is currently working towards its goal of building growth past 2 million barrels. The approach has been one of disciplined and calculated growth within an industry of tight operating and profit margins, competing with larger and bigger budgeted corporate breweries like Millers and Budweiser.

The tour of the original Pottsville brewery is a step back in time and a history lesson in its own right. The tour encompasses all aspects of history, brewing and current operations, offering a fantastic opportunity to walk the production line and visit the hand dug caves underneath the brewery that acted as the original barrel filling and beer storage rooms for the finished product (the caves were bricked up during prohibition). It is also interesting to be able to tour the facility and chat with the guys as they prepare the beer in brew kettles like the one below. 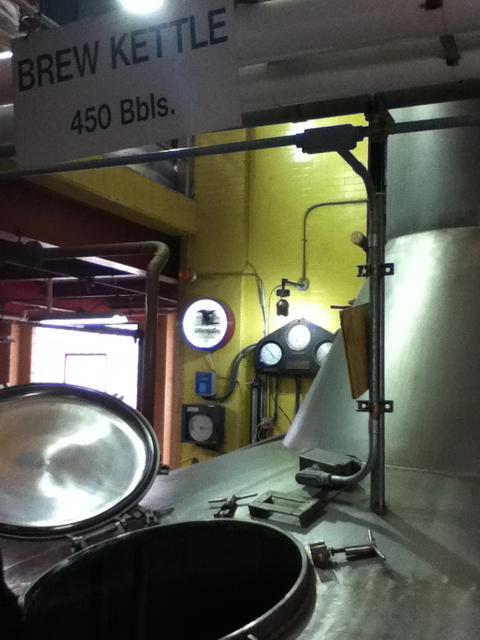 The Pottsville brewery produces beer in cans and bottle, with barrels now being produced at its newer facilities in Mill Creek, PA and Tampa, FL which have helped the company to meet the growing demand for its product. While the photo below shows bottles under production, the brewery was producing Yuengling Lager in cans on the day I toured the facility. 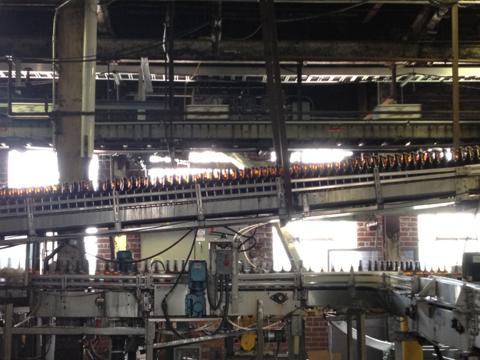 The tour is well worth the time to see an end to end supply chain in operation, and any beer connoisseur will appreciate being able to watch the process as raw ingredients are turned into the finished product, as can be seen below (although the sample in the cup is a Porters not a Lager): 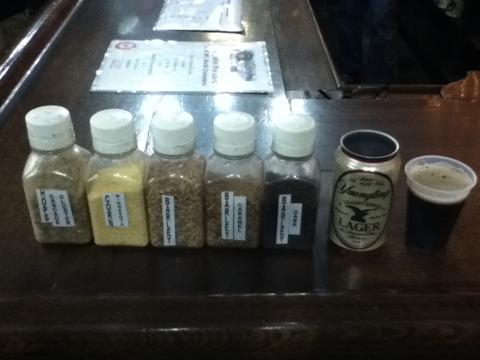 The tour of the Yuengling Brewery is not only a step back in time through America’s oldest brewery, but it is also a lesson in the merits of seeking quality in investments. It is also a reminder of what is great about business in America, and Dick Yuengling’s passion and pride for the company is continuing to drive it forward as one of America’s fastest growing breweries.

What is obvious from touring the facility and having a (brief) chance meeting with the owner, is that the company is in good hands and is working on sustaining its reputation as not only a quality brewer, but as America’s oldest brewer. Beers stocks can be a fickle foray into investment; quality wins hands down over quantity and scale. I for one would prefer to place my investment in this company directly into its product (it is a private company after all). All I need to do now is get Yuengling Porters exported to Australia; maybe that’s what Dick Yuengling is pondering below… 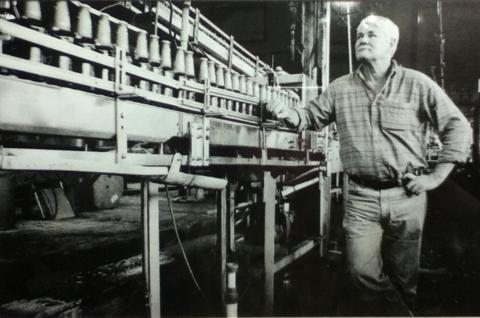