The new beer – Kuding-Ta IPA – is flavored with the bitter kuding herb, the leaf of the Chinese holly plant, plus New York-grown Chinook hops.

It’s part of plan to grow the Empire Brewing Co., which operates an Armory Square brewpub and is currently building one of New York’s largest craft breweries off Route 13 in Cazenovia.

The goal is to expand Empire’s brand identity beyond the Empire State — and into the world’s largest economic market.

In Central New York, Kuding-Ta IPA will available in about two weeks on tap at Empire’s Armory Square brewpub, 120 Walton St. At the same time, a Chinese-made version will debut in the brewpubs operated by Panda Brew of Beijing.

The beer will then be made by Panda Brew in China. The company has 4 brewpubs and sells packaged beer in 40 Chinese cities. 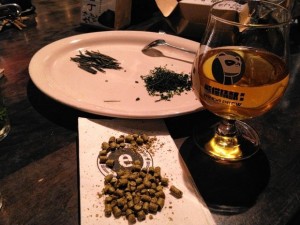 “It’s a way to get our name into the Chinese market, and get Panda Brew’s name out here,’ said Empire Brewing owner David Katleski.

The joint venture with Panda Brew is the second collaboration between Empire and a Chinese company. The first collaboration, with China’s Jingwei Fu Tea company, produced a beer called Two Dragons Ale. It debuted at the Syracuse brewpub in February.

Both grew out of a trip Katleski took to China in 2014 with a delegation sponsored by CenterState CEO, a local business development group.

The difference: Jingwei Fu is a tea company but not a brewer like Panda. Empire is gearing up to produce Two Dragons at an as-yet-unnamed Upstate New York brewery for the Chinese market.

The Kuding-Ta IPA will be brewed independently by both Empire and Panda.

Empire head brewer Tim Butler had been discussing the formulation of the new beer for the past several weeks, over the messaging service Wechat, with Panda co-founder and brewer Pan Dinghao. They didn’t finish the final recipe until meeting early Tuesday, hours before the beer went into the brew kettle.

The beer will be a light golden ale, Butler said. The kuding herb offers enough bitterness and unique flavor and aroma that the brewers decided to only use it for the brewing, saving the New York Chinook hops for a late addition to give the beer an American hop aroma.

Kuding, Pan said, has a taste that starts very bitter but mellows over time. In China, kuding is also used for medicinal purposes, including reported benefits to eyesight, blood pressure and a reduction in the aging process.

They will also take a tour of the Empire Farmstead Brewery, which is under construction off Route 13 just south of the Lorenzo State Historic Site in Cazenovia. Katleski is hoping to start production there by May.

The new brewery will have a 60-barrel brewhouse, which will land it among the ten largest in New York state. (A barrel is 31 gallons). It will be able to produce about 70,000 barrels a year, compared to the 1,200-barrel annual capacity at Empire’s Armory Square brewhouse. (In the meantime, Empire is producing beer under contract at Brooklyn’s Greenpoint Beer Works to meet its demand).