Suntory Holdings Ltd., the nation’s third-ranked beer maker by market share, wants to focus on boosting profits at its Beam spirits unit and upgrading its own beers rather than on buying SABMiller PLC’s Peroni and Grolsch brands in Europe. 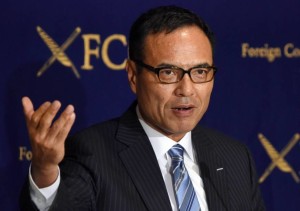 “We studied it, but we have no interest now in acquiring any other business at this moment,” President Takeshi Niinami said Friday, when asked at a media event in Tokyo if he had looked at buying those brands. “We have to concentrate on integration of Beam — we want to concentrate on this integration say at least for three to four years.”

Asahi Group Holdings Ltd. said Tuesday it is considering making an offer for Peroni and Grolsch as it seeks overseas growth amid Japan’s stagnating beer market. Suntory, which lagged Asahi and Kirin Holdings Co. in beer sold in Japan according to 2014 data from Euromonitor International, acquired in the same year the maker of Jim Beam and Canadian Club liquor for $16 billion to boost its sales of spirits worldwide.

“I’m confident that we’ll be able to double the EBITDA of Suntory Beam by the end of 2020,” Niinami said at the event, organized by the Foreign Correspondents’ Club of Japan. The newly created spirits unit still needs to increase its footprint in emerging markets such as China, India, and the Central and South Americas, he said.

Suntory wants to try to differentiate from its competitors in beer through craft and premium brews, said Niinami, as tastes for beer in Japan become more sophisticated. The company’s Suntory The Premium Malt’s held a 3.7 percent market share in 2014, the seventh-ranked beer in Japan behind brands such as Asahi Super Dry and Kirin Tanrei, according to Euromonitor data.