Each April, as Burma’s favorite festival nears, the sound of a familiar tune can be heard through loudspeakers and car radios: Tupo Tupo.

The beloved tune, written by Mandalay’s Myoma Nyein, has become synonymous with Thingyan, the water festival celebrating the Burmese New Year. The title, Tupo, was derived from the sound of Burmese drums and gongs played throughout the holiday. The well-known musician was surprised last year when, sometime in April, a new beer was being advertised with an uncanny name. 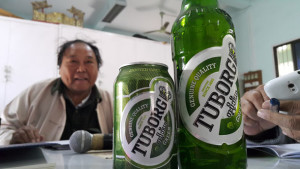 In English you might know it as Tuborg, a Danish brew owned by the Carlsberg Group. As Myoma Nyein’s family recalls, the company had approached the family to discuss using the name of the song as the transliterated version of their brand. The family says they met with representatives of Carlsberg Myanmar four times since 2014, and every time the family said no.

“I always denied them the use of the name ‘Tupo’,” said Shwun Myaing, Myoma Nyein’s son, speaking to reporters in Mandalay on Friday. “I asked them after our last meeting, and their brand manager said they would not begin production and they would try to meet with us again.”

The family alleged that the company’s advertising used the name Tu Po to capitalize on the song’s popularity around the beer’s launch, which coincided with the festival. Later in 2015, they said, cans and bottles were produced with labels reading “Tu Po Beer.”

The Burmese script on the product and the advertising is identical to the song title, which the family took issue with, especially because there is a Burmese character sounding more like the Roman letter “b,” which they believed would make for a more accurate transliteration.

“They could have spelled it in Burmese using ‘Bo’ instead of ‘Po,’ but they just used the well-known ‘Tu Po’ to win over the market,” Shwun Myaing said, “especially around Thingyan. If they did it by mistake, that would be forgivable. But they met with us, and despite our disapproval, they used it anyway.”

The family said they plan to notify the Carlsberg Group’s Rangoon Office with an ultimatum: Change the spelling within one week, or face the courts. Admittedly, an intellectual property case against an international corporation in a country with loose laws might not be much of a threat, but Myoma Nyein’s family wanted to make sure their point was heard.

“Since we don’t have a proper copyright law, we know we’re going to lose the case,” said Zaw Myo Oo, the songwriter’s grandson, “but we are doing this for every Burmese person losing their copyright due to a lack of rule of law.”

Myoma Nyein’s fans have also chimed in on the Tu Po debacle, overwhelmingly to his defense. Theik Tun Thet, a respected Mandalay author and a devotee of the songwriter, said that the company, Carlsberg, “surely knew that they would have problems” if they used the name Tu Po.

“That’s why they met with Myoma Nyein’s sons,” he said.

“If they were being honest, they wouldn’t transliterate it as Tu Po, which is pronounced completely different [from Tuborg],” he added. “Now Myoma Nyein’s song is the name of a beer, and Thingyan festival will seem like a beer-drinking festival.”

When contacted by The Irrawaddy on Friday, Carlsberg Myanmar marketing director Birgette Weeke said the upset was the result of a misunderstanding.

“It’s quite late to do the changes as it has been on the market for a long time,” Weeke said. “However, we never wanted to offend anybody, so we will contact the family immediately to resolve the matter and, of course, we will take any appropriate action.”