The tap list at Jing-A Brewing in Beijing is unlike any bar you’ve ever been to. The Worker’s Pale Ale, Flying Fist IPA and Mandarin Wheat selections are the first indications that this won’t be your ordinary happy hour. 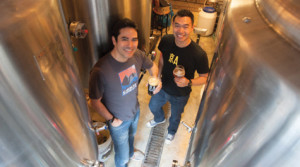 “We’re able to brew craft beers that nobody has really brewed before,” says Jing-A cofounder and brewmaster Alex Acker ’00. “We’re able to find interesting and unique Chinese ingredients like Sichuan peppercorn and seasonal Chinese fruits — things that have never really been played around with.”

While by now, craft beer is responsible for almost 20 percent of beer consumption in the U.S., the industry is still in its infancy in China. Jing-A is poised to capitalize on the world’s largest market for beer, Acker says.

“Things have a way of changing very quickly in China,” he says. “Young people in particular here are very open and curious about new things. Many people here are also starting to care more about what they eat and drink — preferring quality and organic over mass-produced — so craft beer fits in with this.”

Acker began his career in public relations and went on to work at Apple in China, where he met Kristian Li. They quickly discovered a shared interest in homebrewing, and began making beers together. “We were both ready to take the leap into an entrepreneurial venture, and we were incredibly lucky to find this area that we both love,” he says. “Something clicked.”

They named the venture Jing-A, after the first run of license plates in Beijing (“Jing” is “capital” in Chinese). Nowadays, according to the brewery’s website, drivers would be lucky if they could snag a Jing-Q plate. Jing-A “represents old-school Beijing,” says Acker. “For people here in Beijing, it really resonates.”

It began while Acker and Li were working five days a week in the corporate world and brewing at night in whatever space they could find.

“The more positive feedback we started to get, we decided to make the jump from our day jobs into brewing full time,” he says.

When they opened the brewpub in spring of 2013, they finally had a facility where they could do the experimentation they wanted. In addition to Sichuan peppercorns, Acker has brewed with sweet osmanthus flower, jasmine tea, sake and watermelon.

“We’re constantly thinking about seasonal fruit ingredients that we can incorporate into our beer to create something really special,” he says.

It hasn’t all been smooth sailing for Acker, Li and Jing-A, however. For one thing, the microbrewing infrastructure isn’t in place yet.

“There were a lot of challenges finding our systems,” he remembers. “Where were we going to get our hops? Where were we going to get our malts?” China also presents a unique set of licensing, regulations and administrative challenges for the business. The nascent status of craft beer in the country also contributes to the difficulty operating Jing-A in the capital. But selling the beer and growing a fanbase is the easy part.

“Creating interest in our beers has never been the problem,” he says. “If anything, we’ve struggled to keep up with exploding demand for our beers over the years.”

In the near future, Jing-A plans to expand into Shanghai, Tianjin and Hong Kong — which means more taps in China’s three largest metropolitan areas. Acker hopes to eventually be able to export his beers to the United States.

“I think craft beer fans in the U.S. would get a kick out of our beers brewed with Chinese characteristics,” he says. For now, though, Acker is focused on his home market in China. Given that he planned to spend two years in Beijing before returning to the States for a “serious job,” he’s amazed that he’s now spent over 15 years there.

“Some people want the security of a successful corporate job, right?” he says. “That’s really kind of a personal choice — everybody’s different — but for now I’m very happy.”

Acker gives some of the credit for his entrepreneurial skills and risk-taking to his experiences at William & Mary. “I had an awesome experience at William & Mary,” he says. “The Chinese skills that I learned there were immediately useful, but I really grew up at William & Mary. The connections I made, the analytical skills, getting a major in economics — it’s all proven useful. I think William & Mary prepared me to be independent and build my career here in China.”

And if Jing-A does happen to brew a beer in honor of his alma mater, Acker has a few ideas on what to call it.

“We like to be a bit cheeky and irreverent with our beer names,” he says. “So maybe Tribe Tripel? College Delly Kolsch? Streak the Garden Summer Saison? Or Jump the Wall Juniper Pale Ale?”