Beer companies may have to adopt a different approach to target further growth in the Malaysian market amid the extremely difficult operating environment surrounding the industry currently.

The new excise duties regime that was announced in March may eventually cause these companies to rethink their strategies to target a lower net alcohol content in their drinks, said industry observers.

What’s notable is that Carlsberg Brewery Malaysia Bhd’s managing director Henrik J. Andersen concedes in its post-AGM press conference that the latest hikes in excise duties is now pushing beer towards the edge of what is still considered as affordable in the country. 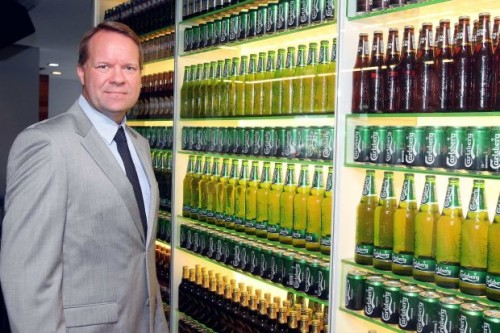 “We had to increase our end prices to the consumer after the excise duty hikes were announced. But we did not pass on the full (excise) tax to the consumer and the reason was because we wanted to ensure that beer remains affordable in Malaysia. Affordability remains an issue here,” Andersen pointed out.

“On average we passed on roughly two thirds of the recent excise tax increase. I do believe the Government is aware of the current spending power of Malaysian consumers and we continue to be in a dialog with the Government to try to avoid further tax increases,” he said.

He added that there was no immediate plans to change its strategy but the new structure may open up some opportunities eventually around lower alcoholic content products.

Andersen also said that excise duties in Malaysia were now considered the highest in the world, based on affordability levels; and second-highest after Norway based on absolute levels.

Perhaps the reason why industry players are still speaking up after all these years is because the net disposable income levels have not really caught up with the excise duty increases.

The Malaysian Institute of Economic Research’s (Mier) consumer sentiment index (CSI) is also still hovering at its record low of 72.9 in the first quarter of 2015, that is still below threshold level of confidence.

Commenting on the MIER figures, Andersen noted that when the CSI was below 100, it also implied a consumer depression while a figure above 100 meant more optimistic consumers.

“When compared with the rest of the countries in South-East Asia, all countries in the region have a CSI figure of above 100, typically ranging between 110 and 120.

“Thus, consumers in Malaysia are not very optimistic and are feeling the pain of price and tax increases that has taken place,” he said.

To recap, the new excise duties that were announced about a month or so ago saw beers with higher alcohol content being charged more in excise duties.

The new structure will now take into account the alcohol content to determine duties that are paid.

It has to be noted that the new structure seemingly targets the majority of industry sales in Malaysia or “mainstream beer” which has a 5% alcohol content such as the popular brands that are readily available in the shops.

These mainstream beers had seen a net hike of about 10% with the latest round of excise duty increase, reports said.

Guinness Anchor Bhd (GAB), which will soon be known as Heineken Malaysia Bhd, said in a statement after the excise increase that the price adjustment would vary for different products based on the alcohol content.

“We expect the average consumer price increase for our key brands to be in the range of 2% to 5%. For certain brands like Guinness Draught, Anchor, we have adjusted the prices downward as a result of a marginal drop in excise duties on these brands,” said GAB.

In more technical terms, the latest excise duty announcement sees duties for beer being replaced to RM175 per 100% volume per litre from the existing duty structure of RM7.40 per litre, while the 15% ad valorem (according to value) tax has been removed.

Asked at the press conference on the impact of the excise hikes that have just been announced thus far, Andersen said that it was still too early to gauge its impact on the industry.

While the latest increase was done only after a pause of 10 years since the last increase in Budget 2006, it also has to be noted that the excise duties were hiked for three straight consecutive years before the 10-year pause in Budget 2004, Budget 2005 and Budget 2006.

Experience from other countries also show that pursuing continual hikes in excise duties may eventually cause a reverse in total net amount of excise duties collected as a whole, contrary to its intended effect of adding to Government’s coffers.

Carlsberg, which owns about 25% associate stakes in Sri Lanka-based Lion Brewery (Ceylon) PLC, said that such phenomenon happened in that country when the government there announced the excise duty increase.

“We were a bit setback at the end of last year as the government there announced two very big excise tax increases and we have seen volume dropping after that but we have also seen some volume starting to come back,” he said.

“In fact, what has happened after these two tax increases is that their total tax revenue declined.

“And this is not uncommon as we see this in a lot of countries in that increasing the tax rate does not necessarily mean the government will collect more taxes,” he added.

Carlsberg’s latest annual report 2015 shows that it paid RM683mil (or 41% of its financial year 2015 revenue) in excise duties for products brewed and sold in Malaysia and Singapore.