The tea farmers of Yunnan likely never imagined their harvest being used to brew anything but the classic hot beverage. So when Shanghai’s Boxing Cat Brewery teamed up with Beijing’s Great Leap Brewing to create their Yunnan Amber Ale, diners were in for a treat.

The guys at Boxing Cat say their Yunnan Amber is brewed with three different malts and three hop varieties. It carries light caramel tones and low hop bitterness, and the addition of Dianhong black tea from southwestern China gives the drink a light floral finish.

The Yunnan Amber Ale started to show up in their taprooms last week and quickly became a hit with craft beer aficionados. 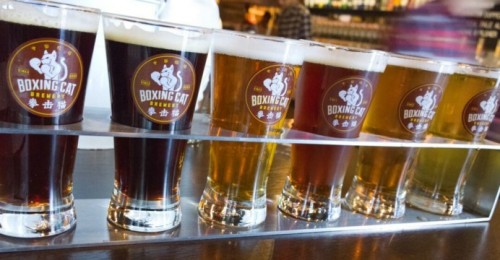 Boxing Cat has been a mainstay in Shanghai since 2008. It was one of the first microbreweries to be established in China, riding the wave of global craft beer growth. It has a familiar back story: a home brewer wanted to turn his hobby into something bigger.

The dream of owning one’s own business, and doing something that he enjoyed, along with the right business partners, was enough motivation to get things started.

Boxing Cat’s name comes from a moment when one of its founders, Gary Heyne, was playing with his pet. He liked how the cat would paw at him, as if the two were sparring in a boxing ring. The moment stuck.

The company started out with an edge-of-town location but eventually expanded to two more-central spots, along with an off-site brewing facility. Over the years, it has won a range of culinary awards in Shanghai. The concept was simple: make good beer, serve good American comfort food. Fittingly, the brewpubs look like they wouldn’t be out of place in the American northwest.

Boxing Cat now brews more than 30 different beers at various times of the year, including collaborations with other craft beer breweries. In particular, it has worked with Hong Kong’s Young Master Ales to create Buddha’s Bold Gesture IPA, a hoppy ale infused with Buddha’s hand citron.

It was jokingly called their first collaboration brew made in one country and across its two systems.

Hop heads will be delighted by the Upper Cut India Pale Lager and TKO India Pale Ale. For something a little stronger, the Bare Knuckle Barleywine offers layers of raisin, toffee and chocolate flavors. The incorporation of gula melaka sugar from Malaysia brings some Asian flavors to the table.

Ultimately, beer is the product of four things: water, hops, barley and yeast. Increasingly, we see craft breweries adding their own signature and flair to new creations, and that is the beauty of small-scale, high-end beers.