Sobir Djaffar looks happy as he surveys the racks of locally produced bottles of Heineken on a Myanmar supermarket shelf. The Dutch brewer has been waiting 20 years to return to the country. But he is less thrilled that the beer — along with its rival brands — is sharing the first aisle of this Yangon store with toilet rolls and baby wipes.

“On the layout, the shop floor, there is no logic yet,” laments Mr Djaffar, sales director for Heineken’s joint venture in the fast-changing Southeast Asian country. The young executive reminds himself with a twinkle that “we don’t see this as problem, but as an opportunity”. 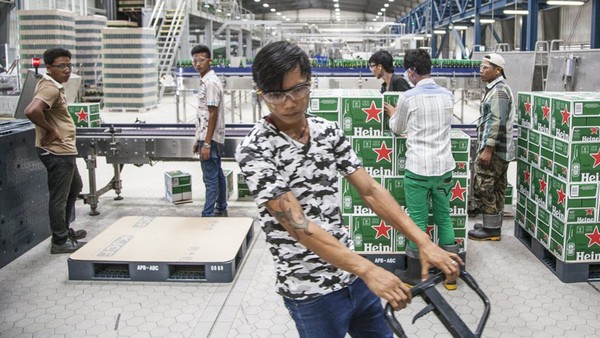 Myanmar is exciting frontier territory for Heineken and its newly arrived international rivals. The return of a civilian-dominated government after decades of military dictatorship has thrown up a rare opportunity for the foreign companies not just to compete for existing market share, but also to use savvy promotion to release latent demand.

However, the process of tapping that anticipated consumer market is not straightforward. Heineken’s Myanmar joint venture is already grappling with logistical difficulties, the complexities of marketing in a new environment and the entrenched supremacy of its local competitor Myanmar Brewery.

“I like the story of the potential of the country more than the [actual] growth,” says Lester Tan, the Heineken venture’s managing director, who is upbeat but cautious. “It’s a long-term investment.” He is speaking in his office a short drive from the brewery, where some staff are still housed in a repurposed container.

A wheel turned full circle when Heineken launched its Myanmar operation in July 2015, two months after its Danish rival Carlsberg and four months before the landslide election victory of Aung San Suu Kyi’s National League for Democracy. Two decades before, international condemnation of the then military regime’s persecution of Aung San Suu Kyi and her fellow opposition activists had led Heineken to abort its Myanmar plans before production started.

Now the company has been tempted back by the prospect of millions of pot­ential drinkers in a country that has more than 50m people and low beer consumption by regional standards. Heineken estimates that Myanmar’s average beer intake is three litres per person a year, not even a tenth of the figure in Vietnam.

Heineken has built a new brewery at a site outside Yangon, commercial capital of the country, in a joint venture with a company majority-owned by Aung Moe Kyaw, a local businessman with interests in the spirits industry.

On a ferociously hot spring afternoon, a cleaner is dusting white sacks of barley and hops from Europe piled high in the warehouse, while bottles and cans of beer rattle off the production line at a rate of about 750,000 a week. Staff mem­bers ranging from a Belgian master brewer to a Myanmar chemical engineering specialist peer through windows into vast brew vessels that are warm to the touch.

Donald Otten, supply chain director, speaking on the factory floor above the rattle of bottles and the whirr of a forklift carrying the finished boxes, says the operation is running more smoothly after some early hiccups that held back the launch by half a year. Heineken was delayed by more than three months be­c­ause customs officers rejected equipment over small errors in the import paperwork — delays Mr Otten suspects were aimed at extracting illegal bribes.

The biggest operational challenge so far is Myanmar’s chronic power shortages. Heineken used its back-up generator 19 per cent of the time on average during its first nine months, rising to 44 per cent in March, when the heat and beer consumption spike.

Such teething troubles mean the company is careful to strike a balance between optimism and realism.

Then there is Myanmar Brewery, the incumbent brewer. It has enjoyed a beer market share estimated as high as 80 per cent, through brands such as Myanmar Beer and Andaman Gold.

Myanmar Brewery has powerful connections. It is 45 per cent owned by Union of Myanmar Economic Holdings Limited, a conglomerate closely linked to the still-influential military. Heineken built a brewery in the mid-1990s in partnership with UMEHL, which still uses the facility and is now in a joint venture with Kirin of Japan.

“They are tough competitors, and with the arrival of Kirin they are international players,” says Mr Tan. “They are not just a single-brand company.”

Mr Tan, a veteran of Heineken’s operation in vodka-loving Mongolia, is fam­iliar with another hurdle for companies that want to make beer bigger in Myanmar. Local­ly made spirits are popular: whisky is cheap, and $1.50, little more than the price of a beer, can buy a 700ml bottle of hooch.

Heineken has chosen to target drinkers who are wealthy by the standards of one of Southeast Asia’s poorest countries. The marketing team’s “man of new urban Myanmar” — the clientele of the ubiquitous roadside bars known as beer stations is overwhelmingly male — earns between $200 and $500 a month. He may be a blue or white-collar worker, or own his own small business. In one visited by the Financial Times, customers ranged from an off-duty engineer to a gaggle of merry students ordering beer by the tower.

One fillip for Heineken is that, bec­ause of the change of ownership involving Kirin at Myanmar Brewery, it won back the rights to use the established ABC Extra Stout and Tiger beer brands. It has also developed a mass-market product to go head-to-head with Myanmar Brewery’s flagship Myanmar Beer. Regal Seven, named after the number of workers who built the foundation for the new brewery, is made from Myanmar rice and typically sells at around a third less than the classic Heineken brand.

Heineken has already had to rethink promotion plans for Regal Seven. It planned a table football tournament before realising drinkers prefer simpler promotions, such as Myanmar Beer’s bottletops offering free drinks or cash.

Now Regal Seven’s own bottletop contest has a grand prize of seven 113g bars of gold, five of which had been claimed by the end of May. The promotion helped it beat its sales target by 30 per cent. That is heartening for the company, but Leen de Schutter, Heineken joint venture marketing director, speaking in her container accommodation, says: “It’s extremely hard to build a challenger with a giant competitor.”

Back in the Yangon supermarket, Mr Djaffar is pressing on with his task of im­proving Heineken’s visibility by moving bottles to a better spot and away from the personal hygiene products. He is not worried that better shelf spots for the brand may also lift its rivals.

The new Myanmar brewers’ bet is that market growth should raise all brands: “We are OK to let them win more — but we will win as well.”