Sapporo Holdings will begin marketing a low-cost beer brand in Vietnam later this month, joining other rivals seeking to develop one of the few growing middle-class markets. 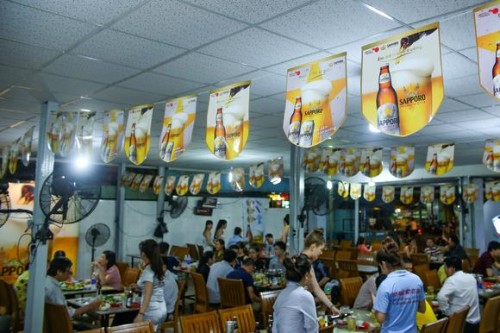 The new label launches July 28 and is expected to sell for 13,000 dong to 15,000 dong (58 cents to 67 cents) per 330mL can at volume retailers. This is the equivalent of around 19 cents cheaper than the mainstay Sapporo Premium lager sold in that market.

While Sapporo Premium conveys a touch of class from a Japanese brewer, the new brand will offer a refreshing taste for drinkers in Vietnam’s tropical environs. The company apparently aims to sell some 150,000 cases this year.

The new product will target the middle class. In Vietnam, people commonly eat at food stands and large cafeteria-style restaurants. These establishments sell the mid- to low-priced brews that account for 90% or so of the beer market.

Competition is increasingly fierce. The state-run Saigon Beer Alcohol Beverage Corp. specializes in selling the 333 brand and other low-cost beers priced at the rough equivalent of 50 cents. Dutch brewer Heineken is gaining fans with an expanded lineup, which includes the midpriced Tiger label. And Belgium’s Anheuser-Busch InBev, the world’s biggest beer company, opened a brewery in southern Vietnam last year.

Sapporo launched Sapporo Vietnam as a joint venture with a state-run tobacco company in 2010. The partners built a brewery the following year near Ho Chi Minh City. But their market share languished at 1%.

This led the Japanese company to make Sapporo Vietnam a wholly owned subsidiary last year. The operation is reinforcing its marketing structure and expanding sales channels into Danang and elsewhere. Sapporo will leverage the new brand to develop the middle-class demographic.

Vietnam chugged 3.9 million kiloliters of beer in 2014, trailing only China and Japan among Asian countries. The Vietnamese market is expanding by a few percent annually and is expected to surpass Japan between 2020 and 2025. Chinese beer consumption is hitting a ceiling, making Vietnam one of a handful of growing beer markets.

Japanese brewers have frequently tried to penetrate Southeast Asian markets by marketing their offerings as high-end beers. Now, they see a need to broaden their appeal.