From pre-Christian times to late Middle Ages perhaps any peasant on the territory of modern Europe was able to cook fermented drink from sprouted grain – a prototype of modern ale. This drink was an important addition to the ration, especially in winter time, and was brewed according to a great number of recipes. But later domestic brewing was forced out by artisan brewers and monasteries. What is more, specifically abbey beer became “branded”, distinguished from the varied mass of products of different households and Medieval HoReCa that were sometimes even dangerous to drink. 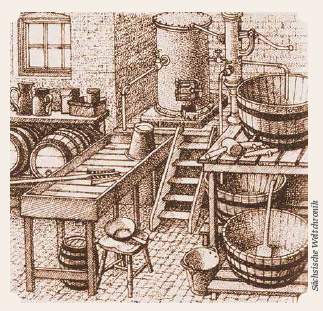 In early Middle Ages incipient beer brewing was a science, in which it was still necessary to find correct decisions and systematize experience. Only the clergy could do it, because there was nobody else – peasants and artisans could not read. Besides, monks were able to choose the best from a great number of beer recipes, because despite ascribed dogmatism, they were more used to dissert upon rightfulness of decisions than other social classes.

Monasteries were the centers of knowledge accumulation that were a sum of opinions and quotations – like a Google of Middle Ages, according to an expression of philosopher B. Groys. Church school of Scholasticism assisted the study of all this experience, and studying Aristotelian logic developed critical thinking. In addition, as well as in a modern scientific environment, there was an experience exchange with brothers from other monasteries that advantageously distinguished monks from artisan brewers.

Then how did it happen that today less than a hundred abbey breweries operate in all of Europe, and their role at the beer market is very insignificant from the point of view of sales share? In particular, remaining breweries at Catholic monasteries are a weak echo of their past and in no way remind about their dominance at the beer market. There were several reasons for it.

At first survivor abbey breweries were destroyed or changed owners under the influence of powerful motion of Protestant Reformation and the Thirty Years’ War, which limited the role of Catholicism in Europe.

Thus, peasants, warmed up by Christian ideas of Reformation, and experiencing the burden of constantly growing duties, started setting up generally fair claims to reduce taxes, including for the church, and to abolish serfdom. The reaction of feudal lords was inadequate which triggered Peasant war, continuing 1524-1526, mainly in the southern regions of Germany. However the revolt was severely suppressed and one of its sad results was devastation of many monasteries. 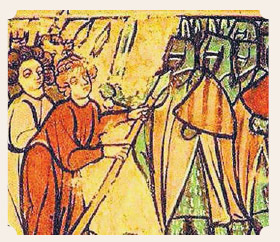 Thirty Years’ War 1618-1648 was a more extensive ordeal as it aimed the Holy Roman Empire itself and virtually divided Europe by the religious affiliation. The losses of civil population and economy were vast, especially on the territory of Germany. And again monasteries with their stocks and households became an easy prey for soldiers and they were ravaged during the attacks.

The secularization* of church property by Napoleon and his allies in 1803 that resulted in destruction of church’s leading role in Europe, including in the field of brewing was still another disaster for Catholics. Most abbey breweries were “resocialized” too, although some of them were later returned one way or another into possession of church.

Finally, with Renaissance and subsequent bloom of natural sciences, brewing went out on a qualitatively new level; the monasteries could no longer house it.

Today we observe a new wave of revival of abbey brewing, connected with interest to piece products, and beer spiritual and historical background. Not the last role is played by a desire to help a monastery financially in its existence and development.

Interest in abbey beer is used by commercial brewing companies as much as possible. Although up to a hundred monasteries are involved in brewing one way or another, in the total sales of beer with monasterial attributes, brands that do not have a direct relation to church undoubtedly prevail.

Next: Beer and monastic Orders ->