At the presentation for investors Christopher Warmoth, Senior Vice President of Carlsberg Geroup, told about the company’s performance in Asia in 2015.

In Asia, all markets grew with the exception of China where the beer market declined. Company gained share in most markets and our volumes grew organically by 2% and 8% including the acquisition impact. Non-Chinese businesses continued their growth trajectory and grew 9%.

In Indochina, Carlsberg Group delivered 3% volume growth, mainly driven by the strong growth of the Angkor brand in Cambodia and solid performance in Laos. Following a strong Q4, volumes in Vietnam were flat after the July flooding in the northern part of the country. 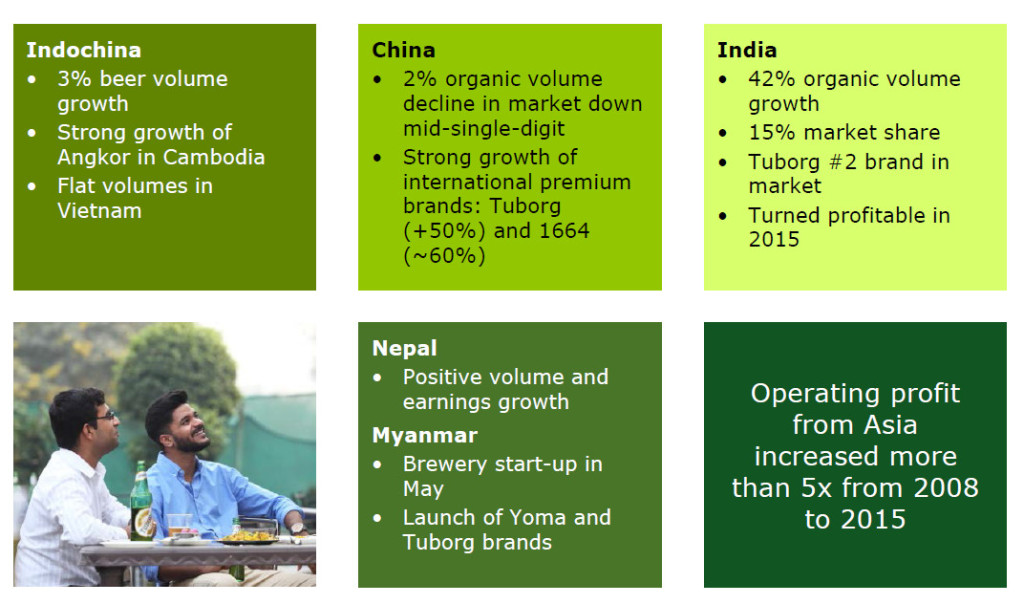 In China, volumes declined 2% organically while the overall market declined by an estimated 5%. The market volume decline was predominantly in the mainstream category, while the international premium category showed solid growth.

Net revenue grew organically by 5%, driven by volume growth and positive price/mix of 1%. In reported terms, net revenue grew 23% due to the positive currency impact and acquisition impact. Organic operating profit in Asia grew 13%, driven by the top line growth and by tight cost control as a result of the early implementation of new operating cost management framework.

Carlsberg Group have closed five breweries in China in 2015 with an additional two closed in the beginning of 2016.

“In China, quite frequently you’re in a position where a brewery was built in the middle of a city and the government asks you to move. That’s happened in Dali, in Yunnan, that project is now just completing. The government takes into account that they’re making you incur costs and so they help you with that move” – Christopher Warmoth told.

“We’re going to go through a similar process in Yibin in East Sichuan and as the caller earlier mentioned, we’re now planning to build a new brewery in Karnataka in India. Besides that, it’s business as usual. But they would be the big projects.

China has been difficult as a market. We’re more skewed to the west where the market has been down a little bit less. And we do continue to see an opportunity for premiumisation in China, both Tuborg and 1664 have been going well. And as we move into 2016, I think we see some chance that the market should at least flatten out after a couple of years of decline”.