Budweiser is enjoying an unlikely source of growth in Russia’s declining beer market, even as the all-American brand continues to struggle at home.

In a country where brewing output has fallen more than 30 percent since 2008, the self-proclaimed King of Beers is growing sales at a double-digit pace, according to the head of owner Anheuser-Busch InBev NV’s Russian unit.

So what’s the deal? Unlike in the U.S. and western Europe, Budweiser is pitched as a premium brand, boosting its appeal to a younger, more discerning Russian drinker. Yet it isn’t as expensive as some imported equivalents. By producing locally, ABI has been able to avoid the impact of the ruble’s drop against the dollar on the price of imported beers. Bud became Russia’s third-largest premium beer brand by volume last year, according to Nielsen estimates, placing it ahead of Heineken. 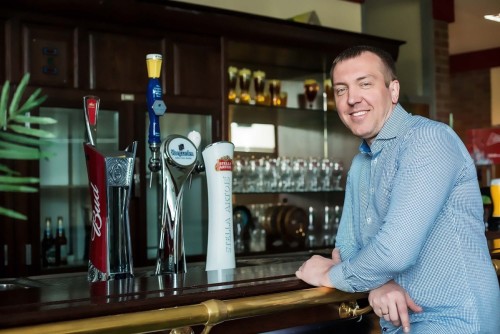 “Bud is a truly premium brand in Russia in terms of both pricing and user perception,” ABI country head Dmitry Shpakov said in an interview in his Moscow office.

Since choosing Russia as Bud’s first market for international expansion in 2010, ABI has ramped up production at a factory near Moscow. That’s enabled it to avoid increasing prices by as much as imported brews. At 61 rubles ($0.87) a bottle, Bud is less than half the price of ABI’s imported Spaten brand, which costs 175 rubles. Yet Bud still retains its international prestige, being priced about 30 percent higher than ABI’s bestselling mass-market brand Klinskoe.

“Several years ago, production volumes of Klinskoe used to be several times higher than Bud in Russia,” Shpakov said. “Since then, Bud has caught up and now the difference is not that big.”
Key to Bud’s growth has been its increased sponsorship of sporting events after the country eased advertising limits for brewers last year. The brand is sponsoring the 2018 soccer World Cup and the preceding 2017 Confederation Cup. In addition, many Russians have a preference for a global brand as part of their lifestyle, Shpakov said.

Yet, Russia remains a tough place to do business, as AB InBev and Carlsberg A/S have shown by closing plants in response to falling consumption. The industry is calling for at least a partial reversal of the increased taxes that have hurt it over the last eight years.

“This would be mutually beneficial as breweries would be able to boost output, ultimately paying more in excises,” Shpakov said.