Carlsberg A/S, the maker of Tuborg beer, reported first-quarter sales that disappointed investors as it offered a gloomier outlook for eastern Europe and Asia.

Beer volumes fell 2 percent, missing analysts’ estimates, as declines in Asia and western Europe offset a temporary rebound in its troubled Russian unit, the world’s fourth-largest brewer said in a statement Wednesday. Carlsberg maintained its full-year profit forecast but that wasn’t enough to buoy the shares, which declined as much as 3.5 percent in Copenhagen, the most in almost three months. 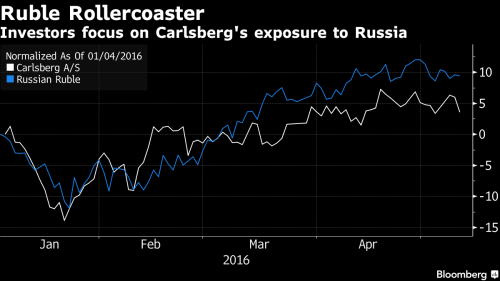 The company’s 20 percent growth rate in eastern Europe is unsustainable,” as it was boosted by an easy comparison with the same period a year ago, Chief Executive Officer Cees ’t Hart said on a call with reporters. “The CEO’s comments about the current Russian pricing environment were quite cautious,” Eddy Hargreaves, an analyst at Canaccord Genuity, said by e-mail.

Revenue growth in eastern Europe was double what analysts estimated, as volume rebounded in Russia after Carlsberg lowered the price of its namesake lager. The beermaker also continued a cost-cutting drive by announcing a shift of 300 back-office jobs to India. The quantity of beer sold in Asia, which Carlsberg has touted as a profit driver, could decelerate, Christopher Warmoth, the company’s new head of strategy and a former regional director for Asia, said in an interview.

Twelve out of 15 divisions are spending less than their target budget, the company said, with further brewery closures planned in China. Beer volumes declined 1 percent in Asia, hurt by a decelerating market.

Sales in western Europe, which accounts for two-thirds of the company’s revenue, declined by 3 percent after retailers including British supermarket chain Tesco Plc delisted Carlsberg products. That missed the analyst estimate of a 2.6 percent drop.

The company sees a negative foreign-exchange impact of 550 million kroner ($84 million) this year compared with a previous expectation of 600 million kroner. Net revenue rose 2 percent on an adjusted basis to 13 billion kroner.