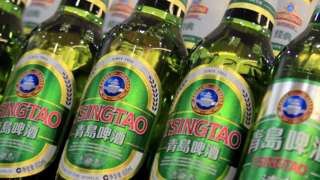 Net income was 1.07 billion yuan ($160 million) in the first half, compared with 1.2 billion yuan a year earlier, according to a statement sent to the Shanghai stock exchange Tuesday. Revenue fell 8.2 percent to 14.7 billion.

Brewers in China are introducing more premium products as they seek to differentiate themselves amid stiff competition for drinkers, and as the country’s slowdown lead to weakening consumption. Sales were further dented this summer, traditionally the peak period for beer-drinking, as China was hit by its worst floods since 1998 and cooler-than-usual weather.

China’s beer market remained under pressure in the first half of 2016 as beer sales were negatively impacted by weak food and beverage consumption and adverse weather, according to the beer maker in its statement on Tuesday. International beer makers are also expanding in China, making competition “more fierce,” the company said.

Tsingtao Brewery shares have slumped 25 percent this year while the benchmark Hang Seng Index rose 5 percent. Its rival, China Resources Beer, has seen its stock rise about 15 percent during the same period.