Japanese Asahi Group Holdings Ltd., and Kirin Holdings Co. are considering bidding for shares of Saigon Beer, Alcohol and Beverage (Sabeco) in the auction expected to be held next month, according to newswire Nikkei. 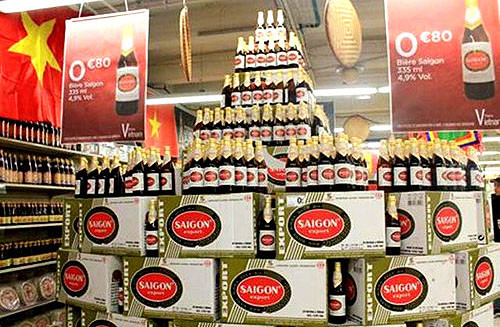 The move is part of the two companies’ plans to expand their overseas operations to counterbalance a shrinking domestic market. Kirin’s foreign business strategy focuses on Asia. In August, Kirin spent $560 million on buying a 55 per cent stake in domestic leader Myanmar Brewery from Fraser & Neave Ltd from Thailand.

Meanwhile, Asahi is seeking to broaden its market presence. It is considering purchasing beer production facilities in five Eastern European countries from the UK’s SABMiller Plc. The price tag on this deal is currently estimated at about $4.81 billion. The figure may go higher if a bidding war erupts.

Earlier in September, Bloomberg reported that a number of the world’s largest brewers from Europe to Asia are lining up for a slice of Sabeco, in a deal worth at least $1.8 billion.

The divestment from Sabeco will be divided into two phases. The first phase will be implemented in 2016, offering a 53.59 per cent stake worth VND24.5 trillion ($1.09 billion) for investors, while the remaining 36 per cent, worth VND16 trillion ($717.47 million), will be issued in 2017 after Sabeco completes its listing on the stock exchange.

On September 26, the Ministry of Industry and Trade approved Sabeco’s proposal to list on the Ho Chi Minh Stock Exchange (HoSE). Sabeco will have 12 weeks from September 26 to complete its listing on HoSE.

Starting operations 130 years ago, Asahi Holding is a global beer, spirits, soft drinks, and food company. It currently has 119 subsidiaries and 83 plants dotted across Japan, Europe, China, Southeast Asia, and North America.
Kirin Holding, which was established in 1907, specialises in alcoholic and non-alcoholic beverages, pharmaceuticals, and bio-chemicals. Kirin has production facilities in Europe, Asia, and America.