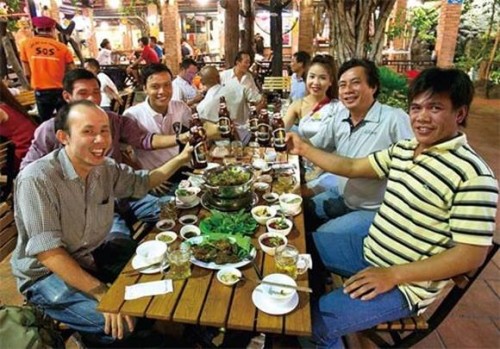 With the Vietnamese government set to sell major stakes in two state-run beer producers, Japanese and European brewers hope to jump in and capitalize on the country’s growing suds market.

Vietnam ranks 11th in the world for beer consumption, according to 2014 data compiled by leading Japanese brewer Kirin Brewery. In Asia, it is the third-largest imbiber after China and Japan, which place first and seventh, respectively, in the world.

Beer consumption in Vietnam increased 6% in 2014 from the previous year, the largest gain among high-ranked nations, Kirin said.

Demand for beer is expected to continue growing in the country in light of population increases and the emergence of the middle class.

Kirin and two other major Japanese brewers, Asahi Group Holdings and Sapporo Breweries, are looking to acquire both Vietnamese companies.

Sapporo began operating a brewery on its own in Vietnam in 2011 and has since been selling its high-end Sapporo Premium beer. It put a lower-priced product, called Blue Cap, on the local market earlier this year.

But as Sapporo has yet to capture a major share of the Vietnamese market, it hopes to acquire stakes in Saigon Beer and Hanoi Beer in order to boost sales. Sapporo President Tsutomu Kamijo is considering ways to get involved in management of the two Vietnamese brewers, including proposing joint ventures and offering entry into the Sapporo group.

Kirin Holdings, which acquired the largest brewer in Myanmar last year, is looking to expand operations in Southeast Asia, while Asahi hopes to catch up with Kirin in international operations through the Vietnamese stakes.

The three Japanese brewers “should be evaluated for their strategy of capitalizing on the growth of the Vietnamese market,” an analyst said.

Suntory Holdings, another leading Japanese brewer, maintains a cautious stance on the Vietnamese market as it is busy integrating operations with Beam, the American spirits maker it acquired in 2014.

The cost of acquiring the Vietnamese brewers, however, stands as an obstacle. Stakes in the two local brewers are expected to cost some 200 billion yen ($1.86 billion).

Sapporo has made two large acquisitions to date, spending some 30 billion yen each to take over Canadian brewer Sleeman Breweries in 2006 and Japanese beverage maker Pokka in 2011.

Kirin is shifting its priority to the rehabilitation of unprofitable units, including the domestic soft drink business and operations in Brazil.

The Vietnamese stakes look to be a high hurdle for Japanese brewers because of acquisition costs and each company’s current strategies and financial condition. But one idea floated is to team up and form a consortium.

While Danish brewer Carlsberg has an interest of nearly 20% in Hanoi Beer, Anheuser-Bush InBev of Belgium, the world’s largest brewer, is also interested in placing the two Vietnamese companies under its wing.